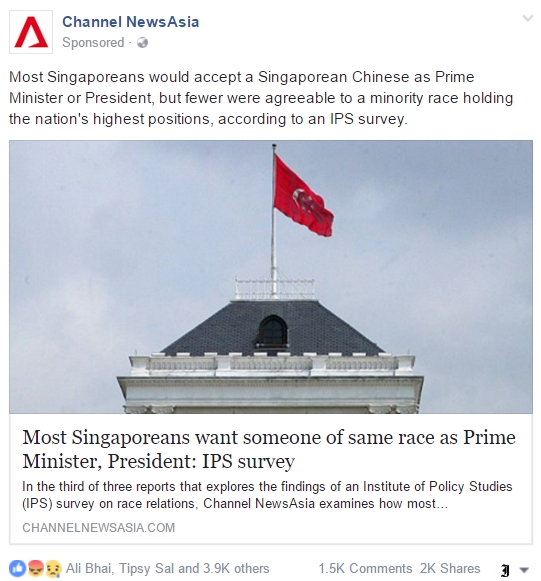 Channel NewsAsia (CNA) today took an ad on Facebook to loudhail one of their reports, ‘Most Singaporeans want someone of same race as Prime Minister, President: IPS survey’. The post has been shared over 2,000 times and has over 1,500 comments, but most commenters refused to believe the news report by the mainstream media.

The report quoting an Institute of Policy Studies (IPS) survey on race relations said that “if given a choice, most Singaporeans prefer someone of the same race as the nation’s Prime Minister or President.”

The survey was commissioned by Channel NewsAsia in partnership with the Institute of Policy Studies. IPS said that this was one of the findings in a nationwide survey of 2,000 citizens and permanent residents on their views on relations between the country’s four major races.

Facebook user Koh Ronald said: “I think this survey was done intentionally to support the EP review to add tweaks to vote in minority race for EP. One can frame the questions in the survey so u get the result you desired.”

Fong Tan said: “we have had Malay, Eurasian, Chinese and Indian as president. I would like to see a non Chinese Prime Minister if he proves he can do it better.”

User Angela Tan was angry: “Can somebody lodge a police report against CNA for sedition? Who conducted the survey? Where was the survey and who answered the survey? How can you generalize and put words into the mouths of Singaporeans! So you mean to say that Encik Yusoff Ishak, Dr. Devan Nair, Mr. Nathan who were all our presidents are Chinese or that while they were in office Singaporeans could not accept that? ???????”

Gary Choo said: “I’m 3rd Generation Singapore Chinese and I do not agree.
Singapore is a multiracial Country with originally the native Malay whom was already here before the Chinese, Indians and English arrived. Highest position is given to whomever is capable of running this Country. BUT, that being said, YES. I do have an issue if that position is given to a “NEW” citizen. 1 of the critical requirement will be a Singapore born citizen and not just some FT who think they can run the Country like it’s 1 huge money spinning Corporation who treats the Singapore child like it’s 3rd class citizen. When that happens, it’s a sign to stand up and leave. Right now, we still have a fighting chance of preventing that from happening.”

Facebook user Khyree Enrico Escudero: “Which survey? I was not part of the survey… Don’t anyhow talk cock can??? I prefer minority president then all chinese in the govt… Nonsense.. Should have done to all Singaporeans only… … Can Permanent Residents vote???”

The report sounds problematic because it admits that “2,000 citizens and permanent residents“, but asserts “Success is independent of race for most Singaporeans” and “Racism still a problem for some Singaporeans“.