Singapore—Perhaps with the variety of things to worry about, having something to laugh at can be a breath of fresh air. A video of a ‘cat left behind on a train’ is providing just that for some netizens.

A netizen named Aishah posted a 14-second clip of a person in a cat costume and full feline make-up on the popular Facebook page All Singapore Stuff.

The ‘cat’ meows realistically and moves in a catlike manner, while other commuters stand and walk around, hardly paying any heed. The ‘cat’ is also seen holding a phone.

The video was captioned, “Who lost their cat on the MRT train ah? Better own up.”

Who lost their cat on the MRT train ah? Better own up<Reader contribution by Aishah>

Posted by All Singapore Stuff on Tuesday, February 25, 2020

And lest we think that a cat costume is the latest form of protection against Covid-19, what it is is just a next-level promo from telco Circles.Life “to flaunt its almost ubiquitous 4G coverage (99.92%) in the country,” which explains why the ‘cat was holding a phone in the first place.

Knowing that it was all an elaborate marketing scheme did not, however, stop netizens from making fun of the ‘cat’ on the train.

One netizen wrote, “Damn…no wonderlah…been looking for him around the neighborhood to feed… Seelah now lost your way again..ask you to stay in the neighborhood.. don’t want!”

Another netizen wrote that he wished he had the courage to dress as a cat in public as well, as it seemed like fun.

One person joked that the ‘cat’ would not survive in Yishun.

Others threatened to report the ‘cat.’

One said she was glad she did not bring her dog…

Another posted a photo of her ‘lookalike’ lost cat 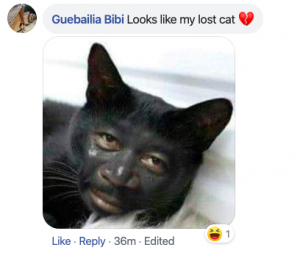 Another, less kindly, joked that it should be sent to Wuhan to be made into a soup

And yet another said the ‘cat’ was in heat

But one person, at least, found the cat adorable.