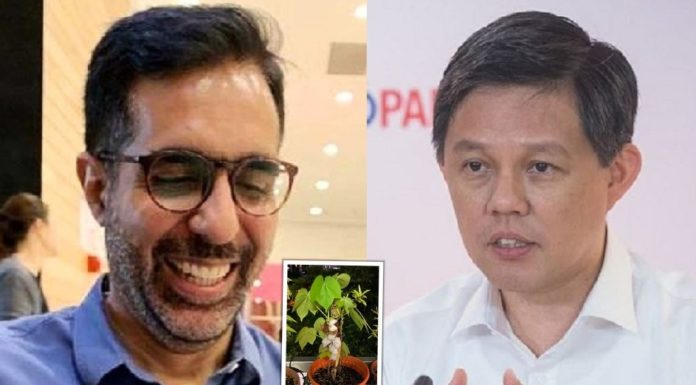 A few cheeky netizens have urged Leader of the Opposition Pritam Singh to tag Trade and Industry Minister Chan Chun Sing in a photo of a cotton plant, alluding to Mr Chan’s “cotton comes from sheep” faux pas.

Back in May, Mr Chan mistakenly said that cotton comes from sheep during a virtual doorstop interview. To show how Singapore relies on international trade, Mr Chan said that even a “simple” surgical mask cannot be made without supply from other parts of the world.

Explaining that Singapore cannot produce the cotton that goes into making three-ply surgical masks, he said with a snicker: “Don’t have too many sheeps [sic] in Singapore to produce cotton.”

Singaporeans pointed out that cotton is a natural fibre that comes from cotton plants and that sheep produce wool, as the video went viral on social media.

Mr Chan later explained he had a slip of tongue that was caused by a lack of sleep. He wrote on Facebook: “I had a good laugh too when I was told that I spoke too fast in a video interview yesterday about cotton and sheep. To any one (especially young children) watching the video – cotton definitely doesn’t come from sheep, it comes from cotton plants!

“In my mind, I have been thinking for weeks of all kinds of substitutes (including wool from sheep and other animals) that we can use for the various parts of the masks that we produce here. Unfortunately in Singapore, we have neither cotton nor sheep. Meanwhile, I should catch up on some sleep…”

While some netizens responding to the Minister’s clarification said that they were amused by his slip-up and found him “cute,” others questioned whether his explanation that he made the blunder because he spoke too fast was believable since he seemed to snicker at the thought of there being sheep in Singapore after making the erroneous remark.

Singaporeans haven’t forgotten about the remark even though it has been more than six months since the incident.

Workers’ Party (WP) chief Pritam Singh shared a photo of a cotton plant that an Aljunied GRC resident had grown, in a Facebook post published on Wednesday (9 Dec) about the varied hobbies of his constituents.

Some netizens who saw the photo quipped that the resident was growing sheep in their home and cheekily urged the opposition politician to tag Mr Chan in the photo: