An Indian family living in Sembawang have allegedly been harassed by their neighbours non-stop over the past two years for burning incense sticks within their own home. According to a relative, the neighbours even went to the extent of asking Prime Minister Lee Hsien Loong to get involved in the dispute.

According to Facebook user Subhatra Sugumaran, her aunt, teenage cousins and elderly grandmother have been enduring never-ending complaints from a neighbour that lives on the floor above them. The dispute escalated to involve government agencies over the past two years.

Subhatra shared that her aunt’s neighbours have an issue with the smell and smoke that the incense sticks and incense cones that her aunt burns every morning and evening during their prayers, with the neighbours claiming that the smoke and smell permeates their home and poses a health risk and fire hazard.

These complaints and the constant stress due to the issue have taken a toll on her family, according to Subhatra, who says that the neighbours have “ruined the family’s peace and well being.”

According to Subhatra, the complaints started pouring in two years ago. At the time, Subhatra’s relatives were in dire straits – her uncle had been diagnosed with cancer and her aunt had to struggle with caring for her husband and running her household, on top of dealing with her neighbours’ demands:

“She had to rush from work to the hospital where my uncle was receiving treatment. And then rush home because my panicked grandma would say there are some officers at the flat. She [the grandmother] doesn’t understand Nor speak English, only Tamil or Malay language.”

Unfortunately, Subhatra’s uncle passed away in October last year. Her grieving aunt, a nurse, had to provide and care for her teenage children and her mother on her own. The neighbours “prolonged inconsiderate complaints” that escalated to involve the authorities has taken a great toll on her family, according to Subhatra:

“My Aunty is a nurse for over 15 years won’t be burning anything that will cause any health issues to the family. The neighbour adds they are fearful of meeting us face to face for mediation due to the safety of their family. We are talking abt a grieving wife, elderly woman in her 80s and two teenage kids, whom they fear for.

“They have taken pics of our home without our knowledge, saying it looks like the house is on fire. The pics shows nothing! And no, we don’t do any burning of incense sticks at night Nor prayers, except that one time last Nov, we had to do prayers for my late Uncle (Hindu rituals). Give us a break already, pls.. we have even stopped using incense cones for the toilets for fragrance, burn incense stick now once a day, wants us to stop burning altogether.

“We have done nothing wrong except pray, we do burn incense sticks which last 30-40mins but there is nothing illegal about doing all of that. If it is, then so are the toxic fumes from vehicles that gets into your lungs daily.”

Photos that Subhatra shared on her Facebook show the multiple complaints her aunt’s neighbours have sent to the authorities. The neighbour’s chief complaint is the:

“Daily burning of incense. Twice or more daily, The smoke enters into my house. The smoke and smell cause a burning sensation to the eyes and throat. Causing coughing and eye irritation. I have 3 kids at home. I’m very worried about the long-term health condition of my kids.”

The neighbour seeks that the Indian family “stops all daily burning of the incense”:

Another letter that Subhatra shared online shows that her aunt’s neighbours have even appealed to PM Lee for help.

The letter reveals that the neighbours sought assistance from the People’s Association, who referred them to the National Environment Agency (NEA), which post Certis Cisco officers to monitor the situation over two weeks.

The neighbour has also sought help from the Sembawang Social Office, although they claim to be too afraid to meet Subhatra’s relatives in person. 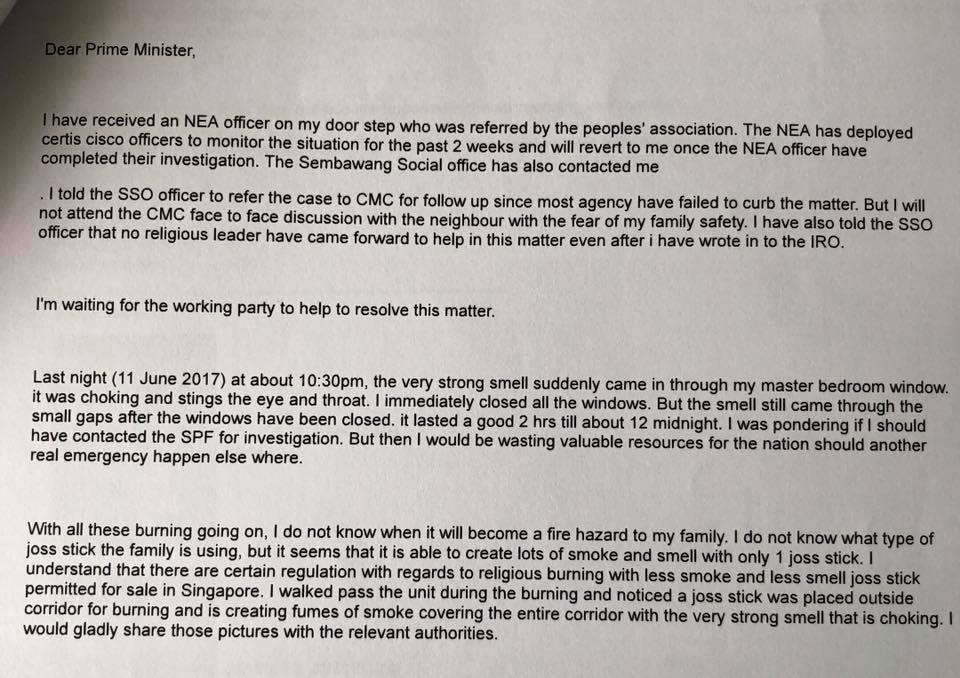 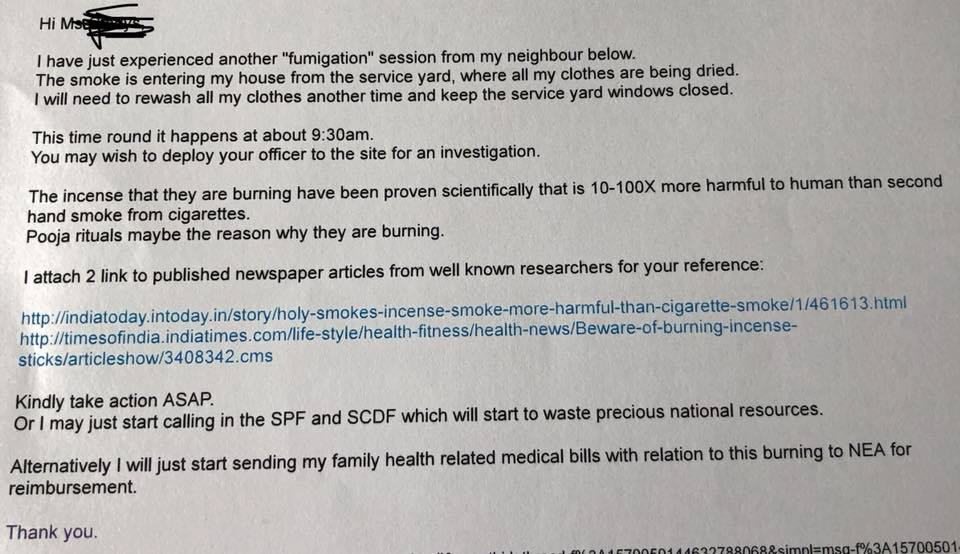 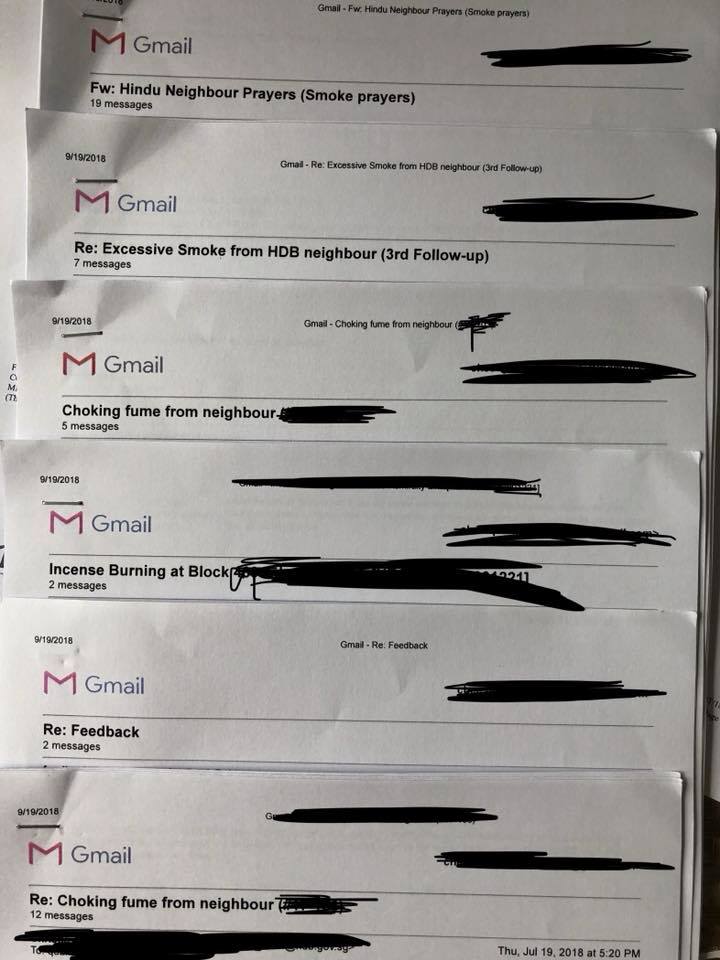 The final picture Subhatra shared shows a response from the authorities that says that they have monitored the situation:

Despite this, the neighbours remained dissatisfied. Subhatra shared that her aunt received a letter last Friday asking her to “attend a conference from community and tribunals division.”

“We were taught how to be tolerant towards our neighbours, fellow Singaporeans, different races, cultures and appreciate the different diversity we are being exposed to.

“It’s been a very difficult year, please leave us alone, leave us in peace”