Both Bukit Batok MP Murali Pillai and opposition party leader Chee Soon Juan have expressed their deepest condolences to the family of the elderly lady who was caught in a fire that broke out in her home on 1 Nov and passed away yesterday (9 Dec) after succumbing to her injuries.

The fire broke out at a 13th floor flat at Block 210A Bukit Batok Street 21 around 4am on 1 Nov, trapping three occupants within the flat – Mdm Goh and her husband, who were both in their 60s, and their son who is in his 30s.

SCDF firefighters who arrived at the scene found that the fire hose reel cabinets at the block were padlocked and discovered that there was no water supply for the hose reel when they broke one of the padlocks.

By this time, Mdm Goh’s husband and their son had climbed out onto the 13th-storey ledge from their kitchen window while Mdm Goh locked herself in the bathroom as the fire built up and suffered from serious burns and smoke inhalation.

All three were hospitalised after the SCDF eventually put out the fire using water from their emergency vehicles. While Mdm Goh’s husband was discharged a week after the fire and her son was discharged on 15 Nov, Mdm Goh continued receiving intensive care treatment until she passed on Monday.

Dr Chee, the secretary-general of the Singapore Democratic Party (SDP), visited the unit after the fire, contacted the SCDF and asked them to investigate the issue and repeatedly asked MP Murali Pillai to explain to residents why the fire hose reel was padlocked and did not have water supply on the night of the fire.

Mr Pillai did not respond to Dr Chee’s open letter. Two weeks after the fire, he finally broke his silence over the issues with the fire hose reel issue in his ward and revealed that two town council staff will face disciplinary action due to the incident.

Jurong-Clementi Town Council (JCTC) later pinned the water supply issue to the contractor’s failure to ensure that the hose system was operationally ready and redeployed a town council staff who padlocked the cabinets housing the fire hose reels to prevent vandalism.

Mdm Goh passed away about a week after JCTC released its statement. Mr Pillai wrote on Facebook this afternoon: “Friends, I regret to inform you that Mdm Goh, the Blk 210A fire victim on 1 Nov 2019, has passed away.

“Mdm Goh’s family asks that their privacy be respected during this trying period. Deepest condolences to them. Wishing them strength to cope with the loss of Mdm Goh. RIP.”

About an hour after Mr Pillai expressed his condolences to Mdm Goh’s family, Dr Chee also paid his respects to the late Bukit Batok resident. He wrote on Facebook: “Just learned that Mdm Goh has succumbed to her injuries she sustained during the fire at her flat at Blk 210A Bt Batok on 1 Nov 2019. Her husband and son who climbed out of the flat over the kitchen window have survived.

“The fire intensified when there was no water supply to the fire hose reel in the block resulting in Mdm Goh’s death.

“My colleagues and I at the SDP extend our deepest sympathies to the Goh family on their tragic loss. We keep them in our thoughts and prayers.” 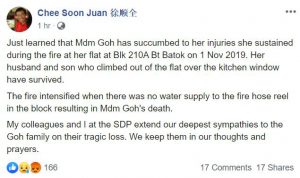