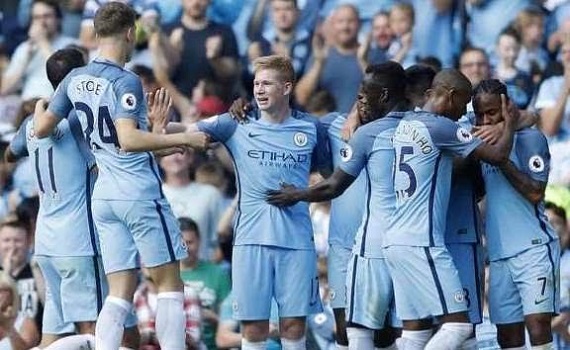 The tonic in delivery comes from the first BETADINE® Youth Football Development Programme, where over a week, during the June school holiday, clinics will provide top-class coaching for Singaporean youth players and coaches.

The programme will see up to 32 footballers – both boys and girls – between the ages of 10-15 benefit from coaching sessions delivered by Manchester coaches, who will be in Singapore from 19 June to 24 June, 2017.

In addition to football skills training, the players will be mentored by the coaches in functional fitness and nutrition to help them on their journey to achieve their dreams.

Chief Executive Officer of Mundipharma Mr Raman Singh says: “Sports reaches and inspires people around the world. As the Official Healthcare Product Partner of Manchester City, we’ve been harnessing this power to raise awareness about key health issues and we now want to use it to help Singapore football.”

There will also be a  “Coach the Coaches” session which will be part of the programme over the week to reach out to young budding coaches from the National Football League (NFL) and an invitation also be extended to coaches of Singapore’s Cerebral Palsy football team.

“We are honoured to be able to support Singapore’s vision of developing youth football. Young footballers will need good mentors and coaches to guide them towards a successful career in football and through this initiative, we believe they will be one step closer to reaching for their dreams of one day becoming football heroes for Singapore,” adds Mr Singh, who came smartly attired in a Manchester City-coloured light-blue suit.

This programme will also be extended to other Asean countries in the near future as City believes it has over 400 million Asian-based fans, half of them in South-East Asia.

Mr Damian Willoughby, Senior Vice President of Partnerships for City Football Group, explains:  “Manchester City is delighted to be partnering with Mundipharma to deliver our City Football Schools clinics in Singapore. Our involvement in this special football programme reflects the club’s broader commitment to bringing football to everyone, whatever level they play at.

“Importantly, it also reflects our commitment to Singapore. It has been one of our homes since we opened our office here in 2015 for the Asia-Pacific region and our presence in Singapore continues to thrive and grow.”

“We are pleased that academy coaches from Manchester City will hold this week-long football event in Singapore. It is always good to have corporations doing more for Singapore football and I hope more organisations follow in Mundipharma’s footsteps.”

Mr Singh’s heart is with football although he was born in the Indian capital of New Delhi, grew up in the United States, and he candidly admits that he draws inspiration from Singapore. The 46-year-old father of two is also a travelholic as he covers the globe 300 days in a year!

Since he joined Mundipharma in 2011, the company has grown its revenues more than 10 times, with a footprint in over 122 markets.

Mr Singh proudly points out that the beneficiaries of the City programme will be the youth players from the S-League and NFL clubs and the football academies in Singapore.

The immediate thumbs-up to the Mundipharma-Mancheser City partnership to promote grassroots football came from a number of these institutions.

Mr Desmund Khusnin, General Manager of five-times S-League champions Tampines Rovers, says: “It is a great initiative to have coaches from one of the world’s most recognised clubs help our young and budding footballers. We are pleased to partner Mundipharma and Manchester City, and look forward to a meaningful and long-term partnership to help our youth footballers develop.”

S-League club Home United’s Chief Executive Azrulnizam Shah, adds: “The programme is meaningful for the Protectors because it helps us augment the work which we do at the Home United Youth Football Academy. The objectives of the programme are in sync with our mission at the Academy to help children reach their fullest potential in their sporting and academic pursuits.”

North-coast based S-League club Hougang United General Manager Matthew Tay saluted Munipharma’s move to develop the future generation of youths. He says: “Our young footballers and coaches always look forward to such opportunities to develop and learn from among the top clubs in the world.

“As a club determined to help our young football and coaching talents grow, we are indeed very supportive of the programme which we are sure will add value to our football development in Singapore.”

For the record, Mundipharma’s independent associated companies cover pharmaceutical markets in Asia-Pacific, Latin America, Middle East and Africa. The headquarters for these territories is in Singapore.

Mr Singh emphasises: “Mundipharma is a prime example of a company that consistently delivers high quality products while standing by the values that represent the company. Our mission is to alleviate the suffering of patients and to substantially improve their quality of life.

“Mundipharma is dedicated to bringing to patients with severe and debilitating diseases the benefit of novel treatment options in fields such as pain, oncology, oncology supportive care, ophthalmology, respiratory disease and consumer healthcare.”

The BETADINE® range of medicines containing Povidone-Iodine is trusted by hospitals around the world for over 60 years to prevent and treat infections. It is a popular brand among consumers at home to treat small wounds and grazes, sore throats, feminine infections and to stop minor problems from escalating into big issues.Follow us on Social Media