Home News M'sian election results - most S'poreans will consider if they should vote...

M’sian election results – most S’poreans will consider if they should vote PAP: Blackbox 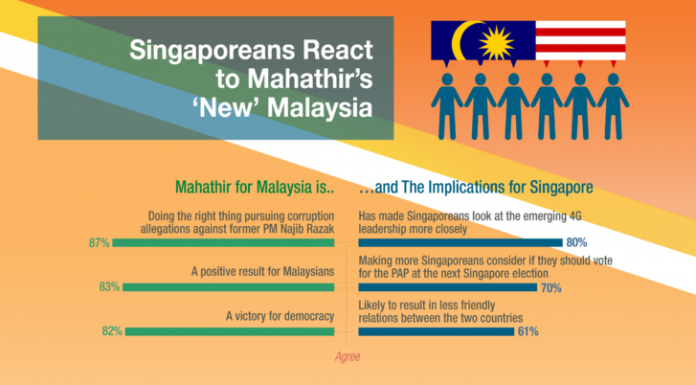 70% of Singaporeans say the results of the Malaysian election in May will make them consider if they should vote for the ruling People’s Action Party (PAP) here.

The Malaysian election saw the opposition alliance, led by Mahathir Mohamed, sweep to victory, booting out the ruling coalition led by Najib Razak.

The Blackbox survey, however, found that Mahathir’s return to the premiership was less favourable to Singapore.

“Although Singaporeans are largely in favour of Mahathir for Malaysia – 83% agree that the former PM’s win is a positive result for its people, and 82% say that the election was a victory for democracy – more than three in five (61%) believe that the new Malaysian government might signal less friendly relations between itself and Singapore.”

“With Mahathir taking the helm of a ‘new’ Malaysia, there has been multiple political reverberations for its closest neighbour, Singapore, as topics such as the high-speed rail and water supply re-emerge as areas of contention,” Blackbox said.

Dr Mahathir has raised the high-speed rail and the price of water as issues which he is reconsidering, and hopes Singapore will agree to renegotiated terms.Follow us on Social Media