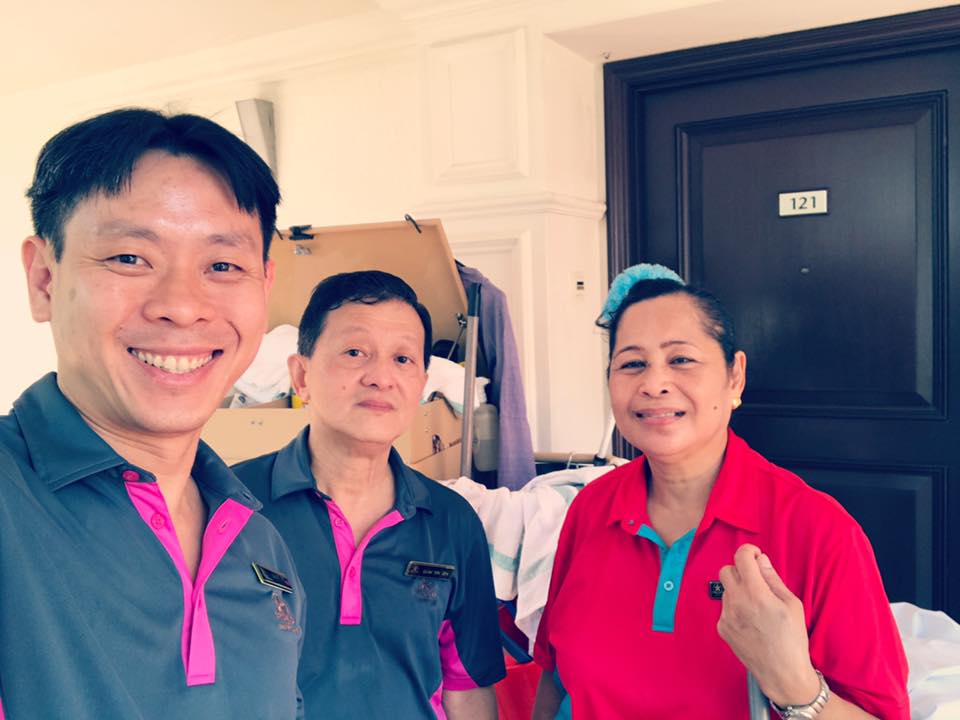 LOUIS Ng is one politician who’s never afraid to get his hands dirty in order to feel the real heartbeat on the ground.

This week, he donned blue-collar attire as a chambermaid at Orchid Country Club in Yishun as part of his regular beat to walk in the shoes of ordinary Singaporeans – literally, by taking on jobs as a GrabCar driver, healthcare worker, coffeeshop assistant and police officer, among others, for at least a day every month.

It’s a serious and sincere desire by the first-time Member of Parliament (MP) for Nee Soon GRC to “really understand and really see what’s happening on the ground” and to make a difference.

“Nothing beats gaining some first-hand experience and going down to the ground to be like the ordinary man-in-the-street,” says Mr Ng, who is also founder of Animal Concerns Research and Education Society (ACRES).

He didn’t make heads turn at Orchid Country Club as majority of the work was done indoors in cleaning rooms. Writing over Facebook, he says: “Really sweated it out gaining this experience as a chambermaid and learnt a lot from my mentors, Rohhayah and Yin Sen. They really have my utmost respect.

“Their work is behind the scenes and the people they help seldom get to see them, let alone thank them. They really do get little appreciation for the back-breaking work they do. And it really is back-breaking work! I can double confirm this after cleaning 20 rooms, vacuuming, sweeping, wiping, cleaning toilets and changing bedding.”

He thanked the management at Orchid Country Club for “giving me the opportunity to gain this experience”. He adds: “A big thank you, Rohhayah and Yin Sen, for all the lessons you taught me today and thank you for all your hard work. Full salute to all chambermaids.”

While MPs traditionally engage residents through house visits, dialogue sessions and Meet-the-People Sessions, Mr Ng simply wanted to go the extra mile by going to the ground, so that he gets a “realistic understanding of the little-known work Singaporeans do”.

“(For example) with cleaners…it’s also a way to understand municipal issues,” he says.

His target is to do one stint every month for the next five years. He aims to return to these jobs so that they are not once-off affairs. “I’m really excited about this, gaining more experience and using these experiences to help draft my questions in Parliament and help improve policies in Singapore,” Mr Ng adds.

Mr Ng, 39, a father of three girls, has always been a down-to-earth heartlander. His early education was at St Gabriel’s Secondary School and Catholic Junior College. He went on to complete his Bachelor of Science (Biology) degree in 2001 at the National University of Singapore and later got to Oxford Brookes University and obtained his Master of Science degree in Primate Conservation.

His first work-stint in November 2015, two months after he was elected in Nee Soon East ward, was at Khoo Teck Puat Hospital, where he served as a healthcare worker in a ‘C’ Class ward for one full shift, where he engaged the staff and patients.

As a happy-go-lucky GrabCar driver, he even offered free rides to passengers while soliciting views from them. He donated the value of the rides towards buying Christmas presents for the children of Nee Soon residents living in rental flats.

As a town council cleaner, he surprised his Bangladeshi staff, who usually walked with brooms and drove in mobile dustbin vechicles. It was something appropriate as he serves as the Chairman of the Nee-Soon Town Council.

Other experiences he is planning to do include a wildlife rescue officer and a secondary school student. He also urged the public to put up suggestions to other heartlander work roles he can experience in the coming months.

Politicians genuinely feeling the ground, by working with their constituents, are becoming a global trend. Eight French politicians last year disguised themselves as citizens struggling with real-world problems, such as using a wheelchair for a day and trying to find affordable housing as a low-income citizen, for a television programme.

“But I’m wary of publicity,” says Mr Ng. “Like the French politicians, doing it with television cameras in tow, may well be to raise awareness of social issues and draw lessons from the experience. But sometimes these moves can back-fire and draw brickbats from political watchers who may well call it a gimmick.”

In 2013, then-Norwegian Prime Minister Jens Stoltenberg went undercover as a taxi driver to engage citizens, footage of which he later released as a campaign video for elections that year. Mr Stoltenberg, who had served eight years as Prime Minister, did not win a third term in office.

Mr Ng reiterated that he was there to work and help as much as he can for the community. He explains: “When I started at Khoo Teck Puat Hospital, I made it clear that there’d be no special treatment. Yes, there may be some risks involved with some negative comments, but I genuinely want to gain experience. I’m very positive there will be positive changes with me walking the talk.”

Fingers crossed, Mr Ng knows he is no ‘RoboMP’.

Much as his target is to do 60 jobs in one five-year term of office, his immediate family priorities may take the better of his quality work-family time since his wife gave birth to twins prematurely in February. The girls, born two months early, were in the intensive care unit at Singapore General Hospital (SGH) but now safely recovering at home.

But hand to heart, I salute the passion of Louis Ng, a one-of-a-kind MP who walks the talk and is never afraid to get his hands dirty in order to feel the real community heartbeat.