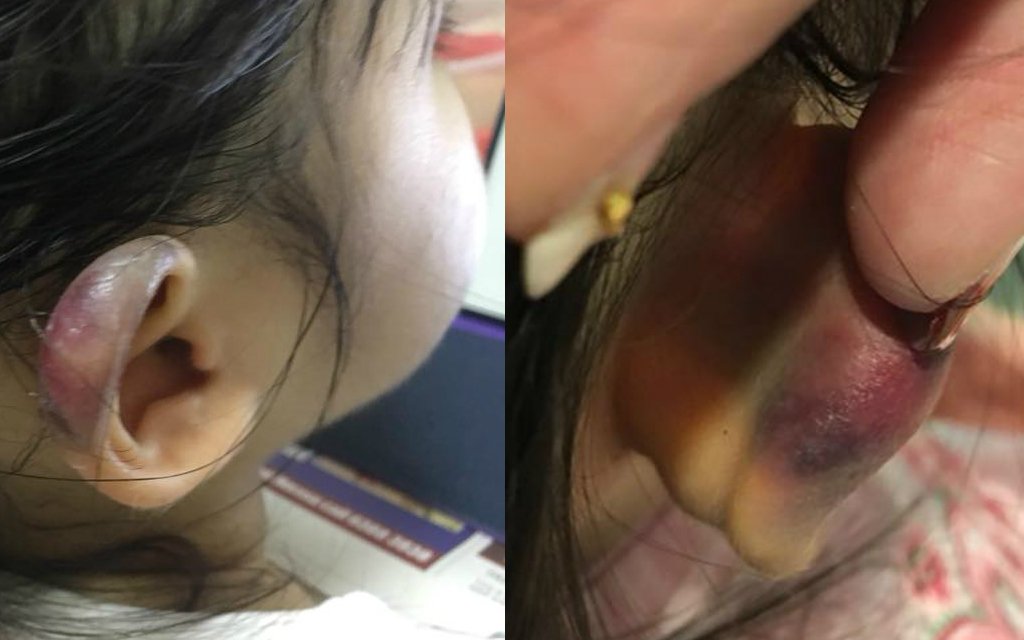 An intense back and forth has been going on between a preschool and a concerned parent after a three-year-old allegedly returned home from school with a severely bruised ear.

The mother, Facebook user Claudia Kwan, suspects that her daughter’s form teacher inflicted the injury. She has reported the incident to the Early Childhood Development Agency (ECDA) and the police. Both the ECDA and the police are investigating the matter.

In a lengthy post on Facebook this past Saturday (10 Mar), Kwan revealed that her daughter suffered the injury on 14 Feb. Kwan wrote that her daughter had been “perfectly normal and happy” when she went to her preschool that morning but things took a concerning turn when her daughter was fetched from school:

“However, when my husband picked my daughter up from her preschool, on the way home, he sensed that something was not right with my girl’s mood, so he parked his car and turn around; only to see that something very unusual and totally unexpected had happened to her ear. Her messy hair covered part of the ear and she was sweaty after a whole day in school but what he saw was a horrific bruise on the top of her ear. When they reached home, my hubby asked me to check what had happened to her ear and to my horror, her ear was badly bruised to such an extent that it was swelling badly. My heart bled and when I asked my daughter about what had happened, she lost control and just broke down into tears and cried.”

Kwan shared how the authorities have been handling the matter on Facebook and her version of events, in detail:

Paediatrician classifies injury as traumatic bruising: “Long story short, the PD, upon seeing my girl’s ear, was shocked too. He diagnosed it as a form of traumatic bruising that was caused by the exertion of great intentional force, and not a result of insect bites or drug allergies.”

Kwan lodges police report: “I followed up by informing my daughter’s preschool principal about the PD’s diagnosis and proceeded to lodge a police report. After the police report, I called to update my daughter’s form teacher and she sounded utterly surprised and shocked that I had reported the incident to the police. The police requested that I returned to the station last week to give a detailed report after my daughter has calmed down a little and would be able to recount the incident better. She then told the police officer the exact teacher who pinched and twisted her ear.”

Preschool allegedly refuse to entertain Kwan: “I went to the preschool to seek assistance, but did not expect to be met with loads of excuses and indifference by the supervisor of the school. Essentially, his message to me is all my daughter’s teachers are from the church affiliated to the preschool (implying that they are Christians), and that he fully believes and trusts that none of his teachers would abuse a child to such an extent.”

Kwan’s child is traumatised by the incident: “Ever since this incident, every night, my girl would wake up suddenly from her nightmares, crying out, “I’m scared, I’m sorry, please, stop, pain!” She has been shouting out her form teacher’s name too. This has been going on every night for the past few weeks, and it pains me deeply to see my daughter in such trauma. She is tormented day after day by the incident and her behaviour has even undergone drastic changes. She is now very temperamental and bursts into rage or tears at times, sometimes even out of the blue for no apparent reason.”

Kwan refused access to surveillance footage: “The supervisor himself said there are a lot of blind spots in the school which the CCTVs could not capture and hence the CCTVs may not have recorded the incident on footage. The classrooms and some parts of the school do not have any CCTVs. He cited the reason that the installation of CCTVs is not a requirement by ECDA and hence it is not compulsory for them to have CCTVs in class.”

The bruise has not faded, even after nearly one month: “It has been more than 3 weeks and my daughter’s ear still has not healed completely. There is still a faint bruise mark. Can anyone imagine how bad her injury was and how much force the teacher had inflicted?”

School claims incident could have happened at home

Yesterday, the school claimed that the girl’s teachers had been under the impression that the ear injury was sustained at home, since the girl also sported a bruise under her eye that Kwan had allegedly said was caused by an accident at home involving the girl and her brother.

The school said in a statement that on 14 Feb, a teacher conducting daily health checks saw bruises below the girl’s eye: “When asked, (her) mother was aware of the bruises and explained it was caused by an accident at home involving (her) brother.”

According to the school, another teacher found the bruises on the girl’s ear hidden by her hair: “(She) claimed she had been accidentally hurt by her brother at home. As (her) explanation of the bruises on her ear seemed consistent with her mother’s account of the bruises below her eye that morning, we did not take immediate action to inform the mother on the new-found bruises.”

The school added that it is cooperating with the police in their investigations and that a review of CCTV footage and interviews with staff did not show that an incident at the school could have caused the injury. The school added: “We also note that (she) returned to kindergarten on the next day and enjoyed the Chinese New Year celebrations with her friends.”

Kwan has rejected the idea that the ear injury could have been caused at home and shared in a second Facebook post that the ear bruise and the bruise below the child’s eye are not related. The cheek bruise was apparently caused when the girl bumped into her elder brother who was exercising.

Kwan also asserted that her daughter did not tell the teacher that the bruise was caused by her brother:

“The school mention about the bruise below my Daughter cheek was a fading bruise that was a week ago. That’s because she accidentally bump into her Brother while he was exercising. The bruise was so faded that it’s not very obvious. It’s very different from the fresh horrific bruise on her ear. There is simply NO reasons to classified the different bruise as same bruise.

“In the morning her hair was tied up, her hair was not covering her ear. The daily checkup Teacher would have seen the bruise if it was present before going to school.

“The teacher claim that when she ask my Daughter, she say it’s her Brother. But this information was not told to me at all. I asked my daughter she mention she didn’t said that. Her brother are 10 years and 14 years older than her. They love her like a gem. There is no way the Brother would have done this because when they saw what happen to their sister, they are as heart broken as me. They can’t sleep well and spent the past one month comforting her at the expense of their upcoming exam and all”

On the school’s comment that the girl enjoyed herself at school the day after the incident, Kwan responded:

“The next day, I’m meeting the principal of the school to find out the details. No one is taking care of my Daughter hence I brought her along with me. She was reluctant to enter the sch but only give in when I REASSURE her million times mummy is just beside u. Anything just shout!

“She went in reluctantly! After an hour or so, I realise my Daughter behaviour doesn’t seem right and I pulled her out immediately. It’s not what the school claim she was happy! She was NOT!

“From the start the school was hiding here and there not telling the full details to me. If they are so transparent they would have shown us the cctv and avoid all these.”