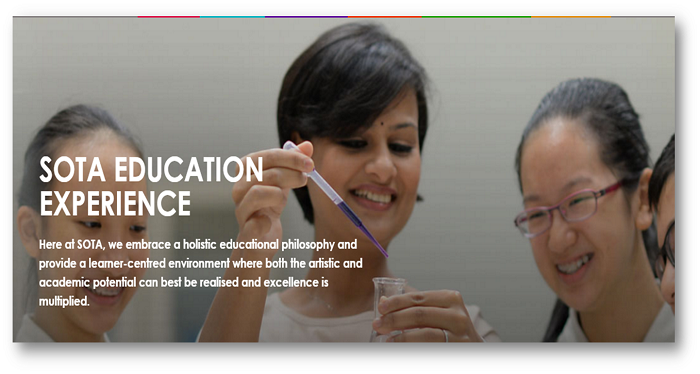 The following is a response from a mother of a student of the School of the Arts (SOTA), to the ongoing debate over whether SOTA students should pursue arts-related degrees in the university. In a recent speech at the school, the Minister of Culture, Community and Youth, Grace Fu, revealed that “over 70 per cent of its graduates have gone on to pursue non-arts related university courses”.

The news has also reported that 83 per cent of students from SOTA in 2015 went on to non-arts related degrees in university. This is a jump from 60 per cent in 2012.

But is SOTA expected to churn out students who will go on to do “arts”-related degrees and pursue careers in the arts?

Yvonne Chng, a mother of a SOTA student, explains that SOTA may not be what some people think it is.

Here are her views on the topic:

First of all the statistics are not accurate. They do not include students who leave before completion of IB studies at SOTA. For example, 19-year old Valerie Yeo who is an apprentice at Singapore Dance Theatre, left SOTA after 2 years to study at the Central School of Ballet in London under a scholarship from NAC, graduating last year with a first class honours degree. There are others like her who leave to focus on their artistic pursuits (minus academics) at art colleges like Lasalle or overseas dance schools and conservatories. That is the reason why the graduating cohort (last year it numbered 165 when they started out in year one with 200) is always much smaller than what they started out with.

Secondly you should bear in mind that SOTA is essentially an academic institution and not an arts vocational school (which is why some students leave before completion; see earlier point). Besides dance my daughter also studies English, Mother Tongue (and must pass, no different from A levels!), history, geography, math, physical science, life science, literature, media education and integrated arts. To give you some idea, my daughter has 11 hours of dance classes a week at SOTA. The amount of time she spends on academic subjects is a lot more than 11 hours. If she were in a vocational dance school overseas she would be spending 30 hours on dance classes. Huge difference. So it is quite possible for students to develop an interest in another area along the way as these other subjects form a big part of the student’s education or they might develop an interest in an area related to their art form e.g. dancers who decide to study physiotherapy as they develop an interest in helping dancers and athletes maintain their bodies at an optimal level.

Thirdly these kids enter SOTA at the age of 12. Many people even in adulthood don’t know what they want to do with themselves; surely it is not unreasonable for a teenager to change their minds especially when they are exposed to a lot of other areas and not just their art specialism. And we are talking here of kids who have spent a lot of time on their art specialisations and who have considerable exposure to the arts so if they decide they don’t want a career in the arts they are making their decision with a good level of awareness.

And sometimes it’s not their minds but their bodies that change. This affects dancers particularly. They may find that puberty changes them physically such that they end up with a body that is not ideal for professional dance or they might suffer injuries during their time at SOTA and not be able to fulfil their dream of becoming professional dancers.

Fourthly you don’t have to pursue an arts based degree course to have a career in the arts. You might not even need a degree (isn’t that going out of fashion ????)! The statistics include only those who have chosen a university course. They do not include those who have chosen not to go to uni or maybe have not made up their minds yet e.g. those who join a dance company as an apprentice, guys going into NS and leaving it till later to make up their minds. Bear in mind that SOTA is quite new and hasn’t had many graduating cohorts; the oldest cohort is now 23 and just entering the workforce. Whatever it is that they have been studying or doing post-SOTA doesn’t necessarily dictate their career choice. They might choose an arts career even if they graduated with a non-arts degree.

And more on the statistics. How do you decide whether the course is arts or non-arts? What do you make of something like architecture? I know of a SOTA boy who right from the time he auditioned for a place in visual arts as a P6 kid, wanted to be an architect; I suppose that’s non-arts but it does require some artistic flair? What about writers (SOTA offers literary arts now by the way)? If you study literature in the uni is that arts or non-arts? My point is that it’s pointless to judge what portion of the cohort is going into arts fields based on their university choices if they even go to university in the first place (SOTA takes in the full range of Express Stream kids by the way, including those who score below 200 in the PSLE).

Also I think it’s totally unfair to say that the kids who choose non-arts university courses are turning their backs on the arts. They are still active in the arts; I know of SOTA grads pursuing non-arts university degrees who still dance. Look at my brother – he contributes to the local music scene even though he has a full-time non-arts job. I know he’s been to schools to give talks to music teachers (and wasn’t paid to do it!) and was engaged by NAC to act as an expert consultant for which he was paid a pittance! Why is that so? Maybe we lack the ecosystem to support professional artistes and our authorities even those tasked to support the arts do not appreciate it enough to pay what it’s worth (although they seemed quite happy to fork out $800k for a bin centre!). Hopefully with each batch of SOTA kids entering the workforce, whether as professional artistes or in arts-related careers or civil servants, we have a support system that takes the arts and arts education more seriously.

Lastly, an arts based education such as the one provided at SOTA is not just about training the young in the arts. It nurtures a certain mindset, one that is creative and willing to take risks. As part of their studies, the kids at SOTA need to create – whether an artwork or a play or a dance or a poem, etc. They open themselves to feedback and criticism. This is very different from studies in maths and science as you can imagine. Right from the start, SOTA has not claimed that their mission was to churn out professional artistes and indeed that is not the purpose. There are kids who enter the school with no intention of pursing an arts career and there are those (like my daughter) who plan on becoming professional artistes and both are totally acceptable. SOTA knows this, we SOTA parents know this; it’s people who don’t understand the concept of an arts based academic institution who don’t understand the purpose of SOTA. Think about the sports school – if the kids there do not represent Singapore or become professional athletes, has the school failed? The kids there would have developed resilience, discipline, perseverance- whatever they choose to do with their futures they will be the better for it because of the education they received at the Singapore Sports School and so will the SOTA kids – they will be better lawyers, better doctors, better civil servants, which can’t be bad for our society.Follow us on Social Media