1MDB(1 Malaysia Development Board)-linked businessman Low Taek Jho, otherwise known as Jho Low, who has been high on the wanted list by both the US and Malaysian governments, has reappeared online. His presence was marked through his self-proclaimed website http://www.jho-low.com/.

Hot on the heels of two books recently published on the 1MDB scandal, Jho Low’s reemergence has served to defend his reputation and innocence against what he claims to be prejudiced and unfair accusations made against him.The two books in question are The Sarawak Report; The Inside Story of the 1MDB Expose by Claire Rewcastle-Brown and Billion Dollar Whale, written by Wall Street Journal reporters Tom Wright and Bradley Hope. Both these books have been gaining in sales since they were launched over the past few weeks.

On his website, Jho Low maintained his innocence of the accusations made against him by the Malaysian government. In a personal letter he signed and posted on the site, he shared his claims that he was a victim of persecution of allegations that have no sound basis or proof. And so through the website, he endeavoured to balance what he called ” a global media circus” surrounding his accusations. 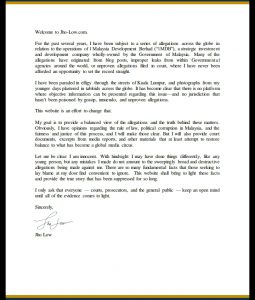 The website hosts his many statements to the media regarding the many legal actions that he had been subjected to thus far. Among them is his claim of the Indonesian government’s illegal seizure of his famous super yacht Equanimity and its handing over to the Malaysian government which Jho Low deemed as being just as illegal. in his own words, Jho Low said that Mahathir “has no interests in a fair and just process”.

Jho Low went as far as posting the various official, legal documents on his website in defence of his innocence. Among these documents were a few of the complaints filed against the US Department of Justice civil forfeiture, court verdict from Indonesia, statements from the Malaysian Attorney General dated 2015, 2016 and 2017 as well as a Public Accounts Committee report dated 2016. It must be noted that the documents sourced from Malaysia were all dated before nine May 2018 when Mahathir-led Pakatan Harapan took over Putrajaya in the general elections.

Rumoured to be in hiding either in China or the Carribean, Jho Low is wanted in Malaysia in connection with 18 million ringgit of missing funds from the 1MDB. He had already been charged in absentia for the said crime of money laundering. The Malaysian government has been searching for him ever since.

Since his website came to light this second time around with many added features ( previously his website only contained basic information about his background etc.), Malaysians have been busy guessing his whereabouts once again.

However, some people like Swiss whistleblower Xavier Justo had scoffed at Jho Low’s attempts of proving his innocence through the use of a website. In his opinion, the legal documents were poor efforts at getting Jho Low’s cases dismissed rather than prove his innocence.

And so the 1MDB scandal continues as one of the main players of this world famous money-laundering case continues to evade the Malaysian authorities.Follow us on Social Media