The Independent News
Home News Men's or women's prison? A dilemma for transgender criminals who are still...

Men’s or women’s prison? A dilemma for transgender criminals who are still transitioning

On February 15, a 33 year old transgender offender named Jonathan Teo was sentenced by the Judge to serve alongside male inmates in the Changi Prison for six months.

Teo was originally born a female but underwent a gender reassignment surgery in 2017 to remove his breasts and womb, though his original female genitalia was not removed.

According to Teo’s lawyer, the removal of a female’s breast and womb is the only requirement for one to be legally recognised as a male. Teo’s identification card also identifies him as a male.

As Teo still possesses female genitalia, his lawyer Chen Jun Liang told the court that Teo might encounter some difficulties in Changi Prison where male inmates serve out their sentence.

Chen also asked if Teo can serve his sentence at Changi Women’s Prison (now known as Institution A4).

District Judge Hamidah bte Ibrahim replied that even she was unsure.

Teo was convicted as a result of the following:

In October 2017, Teo borrowed a sum of money from loan sharks. However, the sum of money multiplied to a total of S$6,000 as he was unable to pay it back on time.

To pay off the debts, Teo agreed to be a loanshark runner, where S$300 would be cancelled off Teo’s debts for every debtor Teo harassed.

Another S$450 would be paid to Teo if Teo helped the loan shark to conduct bank transfers on their behalf.

From December 2017 to April 2018, three debtors had been harassed by Teo and money was transferred on behalf of the loansharks. Teo would also appear at the debtors’ houses and work places to catch them unawares.

Teo claimed that no property was vandalized at this time.

The overall facts of the case and the nature of Teo’s background is a unique one. While Singapore has legalised transsexual reassignment surgery, transgender people still face widespread discrimination.

Similarly there were mixed feelings from netizens as to where Teo should be housed during his jail term with some of them saying rather vicious things.

However, there were also others who expressed concern about his possible treatment in the prison. There are also some who feel that compassion should be shown to Teo. 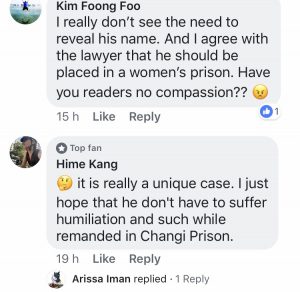 One netizen even suggested a “transsexual prison” be built.