But come next week, the 50-year-old native Slovenian -- the first foreign-born first lady in two centuries -- might be extending her stay in the East Wing for another four years. 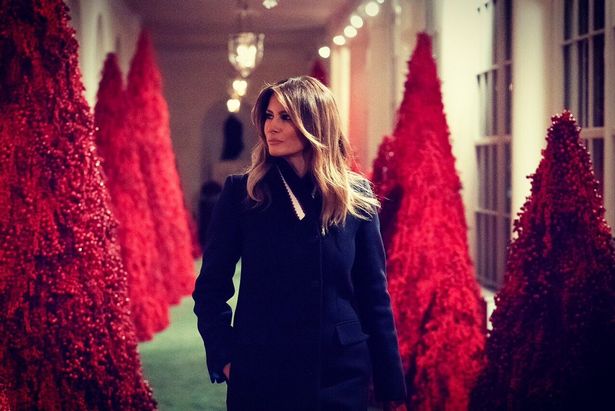 Melania Trump has been at the receiving end of criticism about everything from her words to her clothes. At times, she has seemed less than enthralled with life in the White House.

But come next week, the 50-year-old native Slovenian — the first foreign-born first lady in two centuries — might be extending her stay in the East Wing for another four years.

Trump, the third wife of her president husband, is a former model with a dazzling gaze who has been a discreet source of support for the US leader, mostly out of the camera frame.

In a book released last year, CNN reporter Kate Bennett said the first lady is “way more powerful and influential with her husband” than the public knows.

In 2018, Trump openly called for a senior advisor to the president to be fired. That official was indeed shown the door.

But she largely remains an enigma, at least in political terms. And when she has purposefully placed herself in the spotlight, criticism has followed.

Her “Be Best” anti-bullying campaign — her signature undertaking as first lady — has been less than well-received, with many pointing to her husband’s less-than-civil tweets.

And her fashion choices have sparked voluminous commentary and speculation.

“They can never please everyone at the same time and some first ladies, like Melania, struggle more than others.”

– Glamorous life –
Born Melanija Knavs in April 1970 in Slovenia — then part of Yugoslavia — to a fashion industry mother and a car salesman father, she studied design and architecture before leaving for Milan and Paris to launch her modeling career.

That brought her to the United States in 1996, where two years later, she met Trump.

The first lady has said that becoming a US citizen, in 2006, was “the greatest privilege on Planet Earth.”

Indeed, her American experience is one of privilege — a jet-setting life lived between a lavish New York apartment in Trump Tower and residences in Florida.

Initially, Melania did not seem to be on board with her husband’s presidential aspirations.

“She said, ‘We have such a great life. Why do you want to do this?'” the real estate mogul told The Washington Post.

– Sartorial sass –
Donald Trump entered the White House in January 2017, but Melania and their son Barron only joined him in June, after the then 11-year-old completed his school year.

“Looking forward to the memories we’ll make in our new home! #Movingday” she wrote on Twitter at the time.

But in Washington, she quickly felt the tough glare of the political spotlight.

She earned scorn for wearing stilettos in August 2017 to visit storm-ravaged Texas, though she changed into sneakers before leaving the plane.

Then there was her June 2018 trip to the US-Mexico border to visit child migrants — in a jacket emblazoned with the words “I really don’t care, do you?”

Was she criticizing her husband? The media? Her stepdaughter Ivanka? Or just wearing a jacket she liked? None of that mattered, and the negative headlines lingered.

For Ohio University history professor Katherine Jellison, Trump could boost her image if she would “make more public appearances and grant more interviews — but of course choose her words and wardrobe carefully.”

– Compassionate –
Trump’s major strength as first lady has been her ability to project calm and compassion — something her husband struggles to do — on hot-button issues like Covid-19 and simmering racial tensions.

Though she has been largely absent from the campaign trail this year, in part due to her battle with the coronavirus, her speech at the Republican nominating convention in August earned praise.

“Any time he needs her for a big show of support, she shows up,” Jellison said.

Brower noted that Melania is “extraordinarily popular” with her husband’s political base.

“Donald is a fighter. He loves this country and he fights for you every single day,” she said Tuesday at a campaign rally in battleground state Pennsylvania, her first solo event of 2020.

In a potential four more years in the White House, what would Melania do? Brower predicted she would adopt an even lower profile.

“She is a very private person,” Brower, whose latest book is “Team of Five: The Presidents Club in the Age of Trump,” told AFP.

“And though I think we’ll continue to see her work on helping people with opioid addiction and the more traditional first lady tasks, we will see less of her on the public stage.”