A 21-year-old Singaporean has received a 12-month conditional warning for commenting on Facebook in March last year that he wanted to throw an egg at Law and Home Affairs Minister K Shanmugam.

In a media statement on Wednesday (March 11), the police said that they also issued an advisory to a 48-year-old Singaporean who, in response to the first man’s comment, provided information on where Mr Shanmugam would be.

At the time he made the comment on Facebook, Edmund Zhong was a full-time National Serviceman. When asked about it, he said his remark was merely made in jest. He added that he bore no ill-will towards Mr Shanmugam and had no plans to actually do anything wrong or harmful.

Zhong said: “I posted it just as a joke, based on the news on the Australian senator.” He was referring to news that a teenager had smashed an egg on the head of Australian senator Fraser Anning after the latter had blamed Muslims for the mass shooting in Christchurch on March 15 in which 50 people died and 49 others were injured.

When CNA reported that 17-year-old Will Connolly had smashed an egg on Mr Anning’s head, Zhong left a comment on its Facebook post. He said: “I wanna do that to K Shanmugam. I swear.”

As a result, a report was filed against Zhong on March 19, according to the police. They said: “The police take such threats seriously, and will carry out investigations accordingly.”

Zhong said his only intention in making the comment was “for entertainment” and that he did not regret making it. He said: “To be honest, I don’t feel much regret. I feel it’s a matter of freedom of speech, and that we have a right to voice such opinions.”

Zhong was visited by the police in his home because of the remark, he said in a Facebook post on the Complaint Singapore group page. 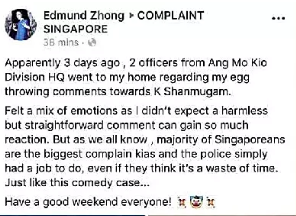 In a Facebook post on March 27 last year, Mr Shanmugam said he realised that the comments were somewhat exaggerated and laughed the matter off when he was told about them. 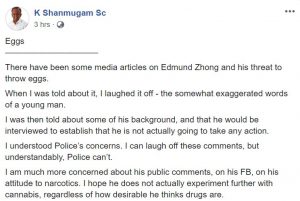 Zhong had committed several drug-related offences before the egg remark in March last year. In 2017, he had been arrested for consumption and possession of cannabis and drug-taking utensils and served a 12-month sentence in the Singapore Armed Forces’ Detention Barracks, the police added in their statement. He completed the sentence in 2018.

While investigations were being carried out into his egg comment last year, Zhong was found to have committed more drug offences. He was convicted of them and is now serving a three-year sentence in prison. /TISGFollow us on Social Media