Man runs around in underwear, making policemen forget their masks

Strangely, the two police officers who subdued him – one male and one female – were not wearing masks at all which is now an offence in Singapore 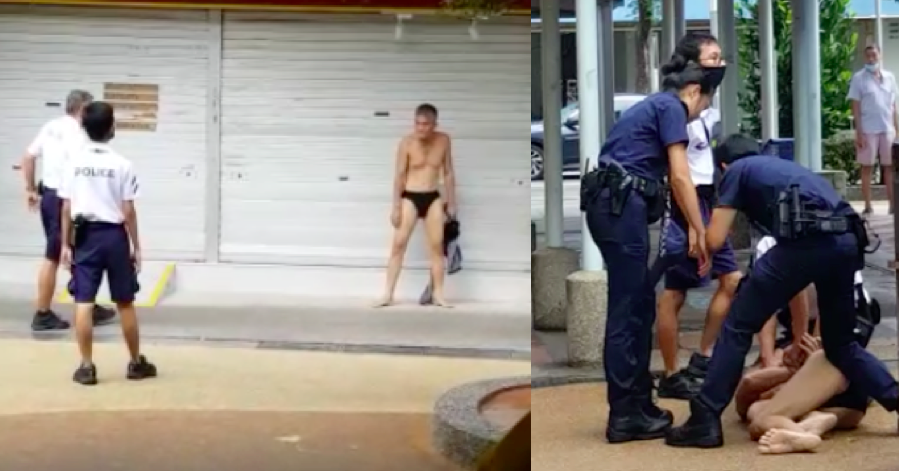 A viral video of a man running around in his underwear was circulated on social media and WhatsApp messenger.

In the video, the man was arrested by the police in Geylang Bahru after he stripped down to his underwear in public.

Footage of the incident, circulated on April 13, showed the man already undressed and swinging his apparel wildly at two Community Policing Officers dressed in white polo tees and black Bermudas.

Curiously, while the Community Policing Officers were wearing masks, police officers who subdued him – one male and one female – were not wearing masks at all.

In response to media queries, the police said that they received a call for an incident that occurred along Block 67 Kallang Bahru.

They added that a 54-year-old man was subsequently arrested for public nuisance.

Minister for National Development Lawrence Wong announced on Tuesday (Apr 14) that it is now mandatory to wear a mask when stepping out of the house, with some exceptions.

The mask-wearing requirement takes effect immediately, said Mr Wong who was speaking at a press conference by the multi-ministry task force tackling COVID-19.

Individuals who are caught refusing to wear a mask will be fined S$300 on their first offence, while those who flout the rule a second time will be fined S$1,000. Egregious cases will be prosecuted in court, he added.
/TISGFollow us on Social Media