The Independent News
Home News Man kneels in front of girlfriend as if he's being punished in... 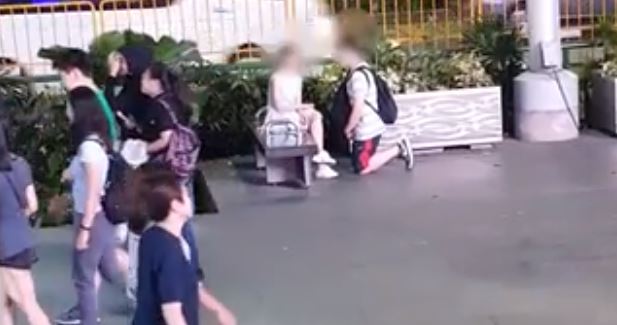 A man has been caught on camera kneeling in front of a woman who appears to be his girlfriend or wife. The scene, which took place around 10pm last night, was quite a sight since it appeared as though the man was kneeling as part of some sort of punishment instead of looking like he’s kneeling as a joke or kneeling to propose.

A netizen called Chris who spotted this noted that the man and woman were talking to one another but he could not make out what they were saying. Chris wondered, “(Wonder) what he did wrong to warrant such punishment.”

In February this year, another man was filmed on his knees begging his girlfriend for forgiveness in Orchard. In a video clip that went viral, the man can be seen getting pushed to the ground before he kneels to plead to his girlfriend.

As his girlfriend continued to scold him, he hung his head in shame and accepted her treatment of him.

The video began trending with several netizens calling the man a disgrace to men and wondering why he was still with a woman who treated him so poorly.

In response, the man – HungYen Gwee, a Malaysian working in Singapore – wrote on Facebook:

“Firstly, I’m sorry to those that felt offended that I kneel down. I just want to say that there is a reason for me to kneel right before her. (Sorry I won’t be telling the reasons as I still need more time to accept the truth)

“However, everyone has their problems and their ways of settling their issue. And I guess probably I didn’t do it well. Personally, at that time i felt that kneeling was a way to show sincerity. When people propose they also kneel to show sincerity, chivalry is not dead. If a man truly loves a woman he will do the most unexpected things that he normally won’t do.. i’m pretty sure everyone is the same?? I do not want my ego to ruin our relationship.”