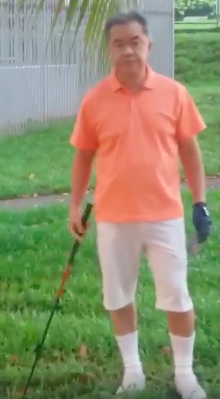 A video of a man golfing behind HDB blocks in Choa Chu Kang went viral after he was filmed on Tuesday (May 12).

The video, almost two-minutes long, showed a man holding a golfing club and being filmed by another, who was trying to get him to face away from the HDB blocks and golf.

In the video, the man filming could be heard speaking the entire time, and the clip started with him saying, “I’m a park user, you want to do (golfing), do the other direction”.

“This gentleman, I told him to practice somewhere else, or against (sic) hitting people, don’t want to listen (sic)”, he added.

The man filming then asked the golfer if he was willing to listen and oblige, but the golfer added, “Nobody passes here”.

“Don’t do this direction, I already told you”, the man filming insisted, as the golfer repeated that no one walked by him golfing.

The golfer also then told the man filming not to raise his voice, with their argument continuing but the golfer’s replies were barely audible.

“You want to listen, you listen. I gave you the last inform. Okay? Thanks”, the man filming said, before ending the clip.

While it was not clear what had happened to the golfer, or his hobby, netizens were divided. Some added that the man filming could have been more polite, or let the authorities deal with the matter. Others said that playing golf there was indeed dangerous especially around a housing estate.