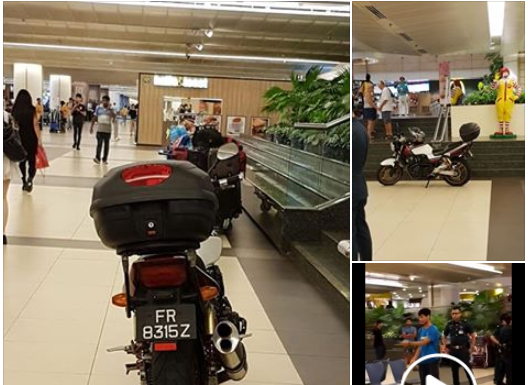 A still unidentified man has been arrested for driving his motorcycle all the way into Changi Airport Terminal 2’s  arrival hall on Wednesday, January 31, 2018. How this man was able to drive his motorbike all the way into what is supposed to be a highly secure area remains unknown.

Police arrested him for driving his motorbike into the basement of the terminal’s arrival hall, where he stopped right outside a McDonald’s restaurant. Photos of the bike, a 400CC Honda Super Four outside the stairs leading to the fast-food place have been posted on social media, showing people looking on calmly.

Fortunately, no injuries ensued from the incident.

The man has been arrested under the Mental Health Act. A video posted by James Kok on SG Night Taxi Drivers’s Facebook page accompanied the photos, and show a young man in a blue shirt , relatively calm but behaving somewhat erratically, in the presence of several police officers.

The Changi Airport Group has yet to make a statement on the incident, however, the biggest concern seems to be for security, since someone on a vehicle was able to get past security controls in a major global airport. Netizens who weighed in on the incident expressed their concerns

Others expressed worries about terrorism or bombing

By and large, Singaporean netizens felt that this incident should be taken seriously.