The Independent News
Home News Man argues with enforcement officer: “So I need to wear a mask...

Man argues with enforcement officer: “So I need to wear a mask and smoke?”

The man was rude to the officer who tried explaining the rule to him. "Did the government say I cannot smoke outside?” he said 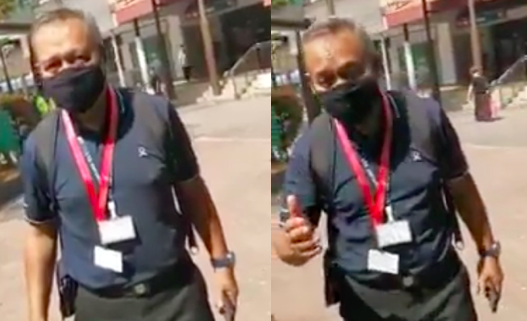 With new rules enforced during the Circuit Breaker such as always being required to wear a mask outside of the house, many have found themselves on the wrong side of the law.

In a viral video, circulated on Facebook and WhatApp messenger, one man questioned an enforcement officer for trying to ask him to wear a mask.

The man was smoking and took the opportunity to try to call out the officer.

The clip, filmed by the man himself, recorded the following conversation outside Bukit Batok MRT:

When the officer answered saying that smokers were not mentioned, the man asked, “Am I commit (sic) a crime right now?”

He questioned if he should be wearing a mask while smoking, or if he wasn’t allowed to smoke at all, even going so far as to ask if “Grab riders” like him were expected to eat with their masks on.

Despite the enforcement officer’s patient attempts at explaining that it wasn’t a crime, the man retorted: “Did the government mention proper or not? Never.”

“You must make thing clear you know, we are Singaporean eh” he added.

The video, shared on Facebook by one Raven Qiu had netizens completely against the smoker.

National Environment Agency’s take on the issue clarifies the situation: “Leaving home just to smoke is not an essential purpose. Any person who leaves his or her home must wear a mask. Any person out for an essential purpose and who wishes to smoke, may do so in an area where smoking is not prohibited under the smoking prohibition law, with the mask removed. The person is to put the mask back on as soon as he or she has finished smoking. He or she should also observe safe distancing measures and not loiter”. /TISG