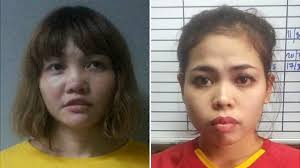 The Malaysian judge in the Kim Jong Nam case said he cannot rule out the possibility the killing was a political assassination.

“But there is insufficient evidence to prove it,” he added.

Besides the sensational statement, the judge also ruled that a trial against two women, an Indonesian and a Vietnamese, charged with the murder would continue.

He asked them to enter their defence. They risk death penalty under Malaysian laws if found guilty of the murder.

The Indonesian Siti Aisyah and the Vietnamese Doan Thi Huong are accused of murdering Kim Jong Nam, the estranged brother of Kim Jong-un at the KLIA 2 airport.

CCTV footages showed them smearing his face. Later it was revealed that they used VX, a nerve agent banned by the United Nations, to smear his face. The incident took place at the Kuala Lumpur airport on Feb. 13 last year.

The prosecution said the women colluded with four individuals still at large, to cause the death of Kim Jong Nam.

CNN earlier said the women accused of murdering the half-brother of North Korean leader Kim Jong Un could walk free Thursday, if a judge decides there’s not enough evidence to proceed with their trial.

However, Judge Azmi Ariffin accepted the prosecution’s case in a blow to the two women’s families who were hoping the Judge would decide otherwise.

“We will do our best at the defence stage.”

Prosecutors described the murder as a scene coming from a Serie Noire movie, the likes of James Bond.

The plotters are said to have recruited the two women who became their girlfriends or dates whom they offered money to play in a fabricated Television script.

The two women later denied any knowledge of the plot to murder Kim or that the Television show they were supposedly participating was fake.

They were coached to believe the show was real and the target was a well-known person whom they should smear with the liquid. The show was supposed to be similar to popular Just For Laughs Gags.