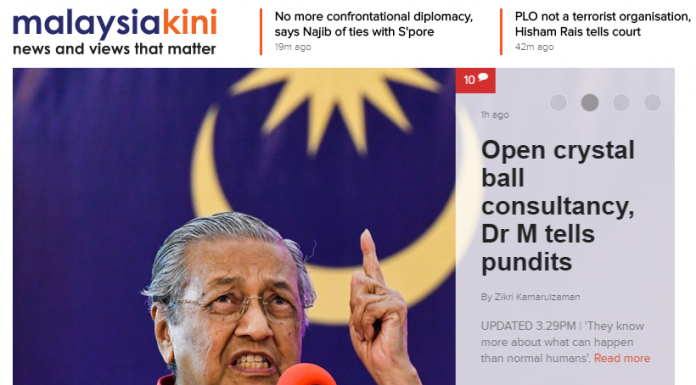 Malaysiakini, an independent online news portal, has asked the public for help in raising RM350,000 (S$ 117,000). The Malaysian Court of Appeals recently reversed a decision in High Court concerning charges of defamation brought against the media outfit by mining company Raub Australian Gold Mine (RAGM). As a result of this reversal, the appellate court has awarded RAGM RM200,000 in damages and RM150,000 in costs, amounts that Malaysiakini is obliged to pay.

According to editor-in-chief Steven Gan, Malaysiakini’s  lawyers will appeal the decision. However, they see the need to get the funds ready. “And should the stay be not granted, we will have to pay RM350,000 in the coming weeks. Otherwise, RAGM can take winding-up proceedings against Malaysiakini.”

Mr. Gan explained that Malaysiakini’s has chosen to make the appeal in order to make a stand on behalf of journalists staying free to do their job. “If it is left to stand, the court decision will make it very difficult for journalists to cover events, in particular, press conferences in a timely manner.”

In May of 2016, Justice Rosnani Saub had already dismissed RAGM’s allegations against the online news portal. Malayasiakini had published reports about the complaints of villagers in Bukit Koman in Raub, Pahang, who had claimed that their health had been adversely affected by the cynaide-related chemicals that RAGM used in gold mining. After the reports were published, RAGM filed a lawsuit against Malayasiakini alleging defamation.

The lawsuit was initially resolved in Malayasiakini’s favor, when the High Court decided that Malayasiakini’s citing of the Reynold’s privilege allowing for responsible reportage and journalism in their defense was sufficient. RAGM appealed this decision, which the Court of Appeals reversed yesterday.

Of late, RAGM has faced financial issues and applied for liquidation.

Stephen Gan started Malayasiakini in 1999 as an independent news portal for uncensored journalism. It’s aim is to publish reports without fear or favor about issues that concern the public.

Gan said, “Malaysiakini believes that independent media is critical to a country’s progress. Without a vigilant media, the powerful are tempted to act in the interest of a few. Such actions lead to the decay of society. It is our responsibility as journalists to tell truth to power and to hold power to account, be they politicians or business leaders. We have managed to fund our operation over the past 18 years without the help of rich or powerful backers. Members of the public have supported us previously and we hope they will once again come to our aid.”

Should Malaysiakini’s appeal succeed, funds donated by the public would be set aside in a legal defence fund for the purpose of court cases the news portal may face in the future.

A few days after Malaysiakini  asked the public for help, more than RM 110,000 had been donated.

Interested donors may contribute to the Defend Malaysiakini Fund via