Home News M Ravi: 'Don't walk the path for fame and glory, do it...

M Ravi: ‘Don’t walk the path for fame and glory, do it for the poor and defenceless’ 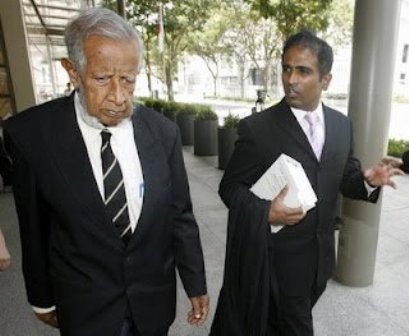 If any single name could be credited with reforming death penalty laws in Singapore, it would have to be M Ravi. Few lawyers can say that they have saved a life.  In one of the defining cases in his career and in Singapore’s legal history, Ravi successfully appeared in the High Court and obtained a last-minute reprieve for a young Malaysian boy by the name of Yong Vui Kong (“Yong”), a mere two days before his scheduled execution. Thanks to nearly half a decade of tireless advocacy and legal defense, Singapore reformed its death penalty laws in 2012, and Yong became the first drug offender to have his death penalty commuted to life imprisonment with caning. But for Ravi’s determined intervention in the Courts, this life would have been lost.

Other outstanding cases handled by Ravi include: the legal defense of British author, Alan Shadrake, who wrote the book “Once a Jolly Hangman” that criticized the application of the death penalty in Singapore; assisting Singapore Democratic Party (SDP) opposition leader Chee Soon Juan against a slew of defamation suits brought against Chee by the People’s Action Party. Arguably, one of Ravi’s best known cases was the case of Vellama Marie Muthu of Hougang, where he successfully argued in the Court of Appeal of Singapore that the Government of the day was obliged to call for a by-election within a reasonable time of a single seat ward falling vacant.

Interviewer (I): Thank you for agreeing to this interview, Ravi! It is an honour to meet an experienced human rights lawyer like yourself! Your cases are so well known and there are so many, it’s almost unimaginable to think that you’ve been doing such hard work for so many cases all these years.

To start off, could you name us some of the greatest challenges you faced in your years as a human rights lawyer?

Activists against the death penalty for Yong Vui Kong.

R: To me personally, the case of Yong Vui Kong was the most challenging and yet the most rewarding. After three whole years of mounting legal challenge after challenge in the Courts and after intensive campaigning in Singapore and with the Malaysian Government, we managed to save a life, two days before he was due to be executed for a drug trafficking offence. The journey was long and arduous. We were often criticised by nay sayers for giving false hope to Yong and his family. It was however all worthwhile in the end. Yong has been given a non-capital sentence and is still alive today.

The worst moments were during the cases of Vignes Mourthy, a 23 year old Malaysian and 19 year old Amara Tochi, a Nigerian footballer, both of whom were sentenced to death for drug trafficking in 2003 and 2007 respectively. The case of Vignes Mourthy was the second death penalty case which I handled. I was only brought in after the case had already been argued by his previous lawyers and Vignes had been sentenced to death. I tried incredibly hard in the Courts to save him from the gallows as I was convinced that he was innocent. Sadly, I was unable to stop his execution. In Amara Tochi’s case, despite my extensive lobbying to the Nigerian Government and addressing the European Parliament as to why they should intervene to save a young, passionate footballer from being executed, I was unable to save him from the gallows.

I: What motivated you to take on all these difficult cases?

R: Love and compassion for fellow human beings and respect for the sanctity of life. My late mother definitely had a huge impact on my upbringing and influenced the way I saw these cases. I felt it motivated me to take on these fights. Many cases reached me after the appeal stage when all hope appeared lost. The family members, especially the mothers, came pleading at the eleventh hour. Although, I knew the odds were stacked against the accused persons, I simply could not turn them down without giving it my best shot in the Courts.

I: Many of them involved you going against the establishment, like the government, judges, the Central Narcotics Bureau (CNB), even some of your own colleagues. Were you never afraid of the consequences?

R: I would not say that I went against the establishment. How can fighting for the poor and down-trodden, the voiceless, ever be considered anti-establishment? I firmly believe in the rule of law and a strong and independent Bar. As I lawyer, I believe that I must fight to the best of my ability without fear or favour. It is with those principles at the fore front of my mind that I took on the cases and I pursued them as rigorously as I could.

I: Was your human rights journey a lonely path, or did you have friends and supporters who helped you along the way? In what ways did they make life more bearable despite the odds?

R: Initially, it was a lonely path. But when some of these cases came to the attention of the public (locally and internationally), more and more people including activists and international human rights lawyers came on board. The activists helped me and the families by constant encouragement and in raising public advocacy. Then came the local law interns and law professors who provided invaluable legal assistance through research and ideas. Likewise, several foreign lawyers also provided great friendship and wisdom.

The state media was constantly putting a negative spin on most of my work that even led to some of my corporate clients leaving me in the initial years. Thank God, the online media came to balance the scale.

I: In the past year or so, the issue of your fitness to practice has come to the fore. I understand you struggle with bipolar disorder. If you don’t mind, could you share with us how that affects you and your daily life?

R: Let me begin by saying that my physician had certified me fit to practice since December 2015. Thankfully, my struggle with my condition has been resolved through a good relapse prevention plan, medication and therapy. It’s almost a year that it has not affected me in my daily life.

I: Indeed. In spite of the odds, you persevered and the last we heard, you are now the Head of Knowledge Management and Strategic Alliance at Eugene Thuraisingam LLP. What were the events that led you to join Eugene’s firm, and what were your considerations when you took up the position?

R: I have worked with Eugene previously on a few constitutional cases. I know he is a highly competent, ethical and compassionate advocate who has a deep interest in social justice. The firm is currently at the forefront of constitutional litigation and has an impressive track record in death penalty cases. They have a strong commercial litigation practice in Singapore and have firm plans to build a regional practice. Joining Eugene Thuraisingam’s firm as Head Knowledge Management and Strategic Alliance Division, enables me to leverage on my international network and bring my wealth of experience to the members of the firm and its clients. The firm is forward thinking, has a great culture and vision which I am proud of and which I feel is a comfortable fit for me.

I: Do you see yourself practicing law again in the future?

R: It goes without saying. As a lawyer of 17 years of standing with an active practice, I miss being a practicing lawyer and I cannot bear seeing people with just, but unpopular causes being shunned, voiceless and unrepresented.

When I was ill, I went to the Law Society’s premises and made a nuisance of myself and conducted myself in some ways I should not have. There is therefore a pending disciplinary matter against me in the Court of 3 Judges. Both the Disciplinary Tribunal and the Law Society agreed that a fine is the most appropriate penalty as I was unwell at that time. I am hopeful that the Court of 3 Judges will consider the fact that I have been well for quite some time now and that I have contributed to society.

There will be very stringent conditions imposed on my practising certificate when I return to practice. I have already been kept out of practice for one year and eight months. I feel I have a lot more to contribute to society through my practice of law, so I am looking forward to hearing from the Court.

I: If you could do it all over again, is there anything you would do differently in the past?

R: I must confess that I had been too intense in my work and often I was emotionally affected by my client’s causes particularly the death penalty cases at huge personal cost. On hindsight, I should have been more cautious of the toll that these kind of cases can have on one’s mind. The social activism and the media frenzy adds to the stress. Perhaps I should have sought more assistance and support from the outset. However, now at Eugene Thuraisingam LLP, I will have the resources and a highly competent team which can assist me when I return to practice.

I: What advice would you give to aspiring human rights lawyers? Should they take up this path in spite of the difficulties you faced?

R: The path I took was a tough one and was highly challenging. It was a lonely path as well.

Those of us who are blessed to be in a position to make a difference must use our legal knowledge and resources to contribute to the advancement of society and morality. Always try to do good when you can. Help those who cannot help themselves.

Apartheid in South Africa and racial segregation laws in America are examples of unjust laws, but backed by the majority of people of that time. People fought at tremendous costs to themselves for these laws to be dismantled and were ultimately successful.

You can say the same of the mandatory death sentence and Section 377A in Singapore. Society will one day realise the unjustness of these laws. But you must be the change you want to see!

Stay true to your principles, and that is what will bring you fulfilment, knowing what you have done is for the greater good, no matter what the cost to yourself.

I encourage aspiring human rights lawyers to take up this path. Be always clear in your head why you do this for. Not for fame and glory, but for the poor and defenceless. Uphold the basic human rights and dignity of the people who come to you and pursue their cause fearlessly to the best of your ability.

I: Thank you for your time, Mr Ravi!

M Ravi has over 17 years of legal practice experience in Singapore, and is currently the Head of Knowledge Management and Strategic Alliance at Eugene Thuraisingam LLP, one of Singapore’s renowned law firms dedicated to the practice of Criminal and Commercial Litigation.

Interview by Ellie Hu, a youth journalist with The Singapore Daily.

—
Article was first published in The Singapore Daily.