The Independent News
Home News Featured News Li Hongyi has founded a new unit within GovTech, with its own...

Li Hongyi has founded a new unit within GovTech, with its own branding and style

Founding Prime Minister Lee Kuan Yew’s grandson and current Prime Minister Lee Hsien Loong’s son Li Hongyi has founded a new unit within Singapore’s Government Technology Agency, with its own branding, website and style. GovTech is a statutory board of the Singapore government, under the Prime Minister’s Office.

The son of PM Lee Lee and Ho Ching, the CEO of Singapore sovereign wealth fund Temasek, Li Hongyi has been employed by GovTech for over six years now. He started out as a consultant and was promoted to the position of Deputy Director in January last year. Hongyi now serves as the director of a unit at the heart of GovTech he founded, called Open Government Products.

Speaking at the GovInsider Live summit at the United Nations Asia HQ last month, Li said that he founded the new unit as he believes the Government can learn much from how big tech companies innovate quickly. He added: “We know how to have good technology, and we know we have big problems.”

While Hongyi’s Open Government Products unit shares GovTech’s resources, manpower and ethos, it has its own website and branding. The unit, which works to build and deploy software products rapidly and scale smaller services quickly, has so far built services like ISOMER, FormSG and Parking.sg.

ISOMER is a tool that allows anyone to easily create a standardised government website, with user-friendly templates. The websites are fast, secure, mobile-friendly, and supports visually impaired users.

FormSG is an online tool that helps Government agencies publish any form onto a website in 30 minutes, compared to the three months it took officials to do so in the past. The forms are standardised, secure, and has saved the Government $65 million in IT costs according to Hongyi.

Parking.sg – an application that allows drivers in Singapore to pay for parking digitally – is perhaps the most well-known product Hongyi has been associated with. The app, which was launched in 2017, costs the Government about $5000 a month to run.

He joked: “We’ve actually lost money doing this – because we’ve now given back $5 million worth of parking fees that we otherwise would have unethically collected from people for time that they actually didn’t end up using.”

Besides these three products, Li’s unit is working to create a new method, called sgID, to identify citizens online to help authorities crack down on fraudsters and internet. sgID gives each citizen a unique set of login credentials that can be used for government services, banking services or medical services.

He explained: “Online, if you are detected to have committed fraud or some kind of scam, it’s very, very, very easy to just delete your account and create a new one.” He added: “There are a few organisations in the world which can have a strong verification method for a person, and those are governments.”

All of the systems Li’s unit is building is ‘open source’ – this means other Governments can use and adapt the code to suit their own needs. The Prime Minister’s son said:

“There’s no benefit to us keeping this a trade secret of how we managed to go paperless in Singapore…A big reason why the technology sector in California and around the world has moved forward so quickly in the last decade is because of the explosion of open source code and open source communities.

“They can take a look at our code, reuse it as far as possible, and hopefully in the long run, contribute back.”

His team also functions very differently compared to other GovTech officers. Revealing that his team has adopted the culture of embracing failure that is prevalent in big tech companies, Hongyi said:

“Instead of treating [failures] like a big point of shame, we try to treat this in good faith – that all officers on the team are trying their best to build a good product. The idea is that you’re going to encounter problems, so you might as well try to learn from them the best you can.”

Every January, team members also pause all non-urgent work and participate in a hackathon. Hongyi said that the hackathon helps his team to “generate a lot of ideas that you would never have found if you just waited for instructions from what is traditionally senior leadership.”

He also believes that it is important to include as many team members in the creative process as possible. Li said: “A leader has to support and facilitate as many of the good people you hire as possible to spend time thinking about the problem, so you maximise the amount of creative brain power.”

While some netizens responding to Hongyi’s remarks praised his approach and inventiveness, others pointed out that Hongyi’s products may not have been developed if his father was not his bosses’ superior: 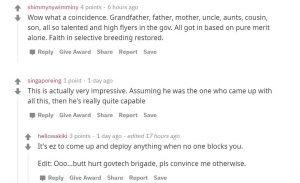 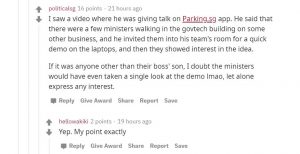 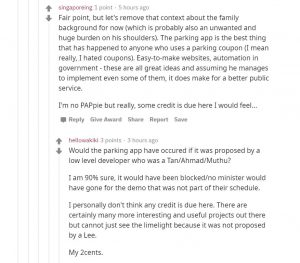 In an earlier interview with Advisory.sg that was released months ago, Hongyi revealed that his typical work day involves product development, working with the Government bureaucracy, figuring out user strategy, project and team management.

Asserting that there are only a few nations like Singapore, he added:

“Singapore has a lot of problems, but one of the things we don’t have is a lack of political stability and a lack of resources. For all our issues, we are in the best position for a few people to do something really right.

There is also speculation that Li may enter politics in the future. In 2017, his paternal uncle and aunt, Lee Hsien Yang and Lee Wei Ling, accused Lee Hsien Loong of grooming him for politics. Li responded to the allegations and claimed that he really has no interest in politics.

Since then, speculation that certain ruling party members have been appointed to mentor Hongyi as a potential elections candidate has been rife.