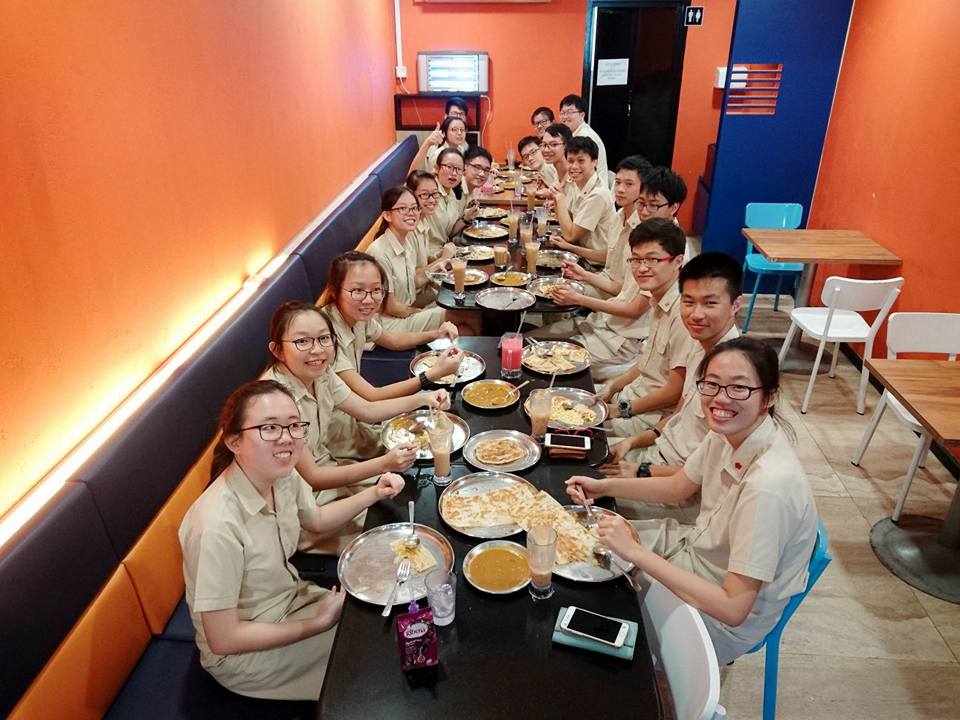 PRATA is probably one of the most popular round-the-clock Indian dishes, among Singaporeans and foreigners.

It’s simply a fried flatbread cooked over a grill, often served with Indian curry, while sweet tooths can even have it dusted with sugar. And you can savour it from breakfast, to tea-times, and even for supper past midnight.

Now prata fever of a different “educational” variety has hit Sixth Avenue, off Bukit Timah Road, with students packing the Casuarina Restaurant, just to relieve examination tensions or to come for how-to-make prata programmes, which are being popularised by part-time MediaCorp actor Murali “The Don” Pillai, who is the restaurant manager.

“About 70 from Hwa Chong Junior College came over Friday mid-morning just to get a relief of exam tensions,” he says. “Their presence made it a full house! Hwa Chong is the strongest supporter among the neighbourhood schools, followed by Chinese High and National Junior College.”

Murali’s longer-term marketing-cum-educational strategy, among the younger generation, is to teach them the nitty-gritties of the roti prata, a ‘pancake bread’ possibly originating from Pakistani or Indian paratha.

The simple basics: How it is made from simple ingredients of flour, sugar and salt, where water is added to the flour to form a dough. The dough is then pressed to make it soft and pliable. The dough is then flattened and flipped and swirled and twirled into a large thin layer before heating it on a hot plate.

He says the classes comprise a multi-racial mix of students and adults, who relish knowing how to make and eat pratas with curry, sugar, condensed milk or just plain.

He explains: “This has evolved to include flavours as varied as garlic, banana, chocolate, durian and cheese. More recently, the dish has also evolved to other sweeter and crispier variants such as “tissue” and “paper” which are pan-fried with butter, rolled into a cone shape and sprinkled with sugar.”

Tracing back the prata “fever”, he says that from the 1980s to the early 90s, the more discerning in Singapore would invariably congregate in Jalan Kayu, considered by many to be the ‘Mecca’ of prata-lovers.

Casuarina is now an award-winning brand with numerous awards and accolades and are rated as one of the best in Singapore. They serve more than 40 varieties of prata will delight and pamper our diner’s taste buds.

Murali says: “From our humble beginning, we are constantly seeking to innovate and improve and now offer a full repertoire of popular Indian curry dishes in our restaurants as well as catering service for events in your offices or homes.”

Casuarina Curry Restaurant at Upper Thompson has something interesting for you! The Prata Scholar Workshop is something you definitely not want to miss. They might possibly be one of its kind, teaching you how to flip a prata, fry an egg prata and ending up with a drink and a prata buffet!

Says Raymond Leong, a NTU undergraduate: “My housemate and I only paid $20 each for the great experience flipping and indulging in the wide spread of different kinds of pratas they have on their menu. The Casuarina staff was very patient and their way of teaching was very fast. You could almost get a job right on the spot as a prata flipper!”

Murali says that Casuarina stands out as the first in Singapore to offer Prata On The Spot, a catering service to make prata on your doorstep!

The restaurant was named a ‘Singapore Hawker Master’ in the roti prata category in 2011. The awards, which recognise deserving hawkers and aim to spur them on in their craft, were organised and presented by The Straits Times and Lianhe Zaobao.Follow us on Social Media