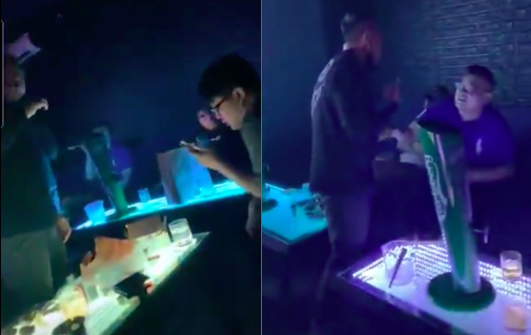 Singapore — A leaked video posted online showed a group of more than eight singing and dancing in what looked like a private KTV room.

The video, allegedly shared by one Wrisney on Instagram, showed the group drinking and partying in the room.

While it is unclear when the video was taken, reports online claim that The video was recorded on Saturday (Jul 31) and posted at around 1 am on Aug 1.

The tables the group was seated around had multiple beer towers and glasses of beer.

As the camera panned around the room in the 1-minute-40-second long clip, it could be seen that most in the group were not wearing masks, with some having their masks pulled down to their chins.

TISG has reached out to Wrisney for comment and clarification.

Last month, two videos that were allegedly taken at one of the Middle Road KTVs – which later were found to make up a large Covid-19 cluster – were circulated online and on WhatsApp messenger.

The KTV cluster was made up of patrons who visited various outlets that spanned across Golden Mile Complex, Textile Centre, Balestier Point and Tanglin Shopping Centre.

In the video clips, six people were seen eating, drinking, smoking and singing karaoke while at a KTV lounge. While they seemed to be spaced out as they were seated, it could be seen that a woman, who was not present in the first video, later joined the group to sit beside a man in a blue t-shirt. It is not clear from the videos which KTV lounge they were taken at.

KTV hostesses are known to move from one table to another over the course of a night, mingling with different groups. This rotation is colloquially known as “butterfly”, and often involves the hostess splitting her time between multiple guests, who each pay her a sum of about $50 to $100 at the end of the night.

Those found guilty of not complying with safe distancing measures can be fined up to $10,000, jailed for up to six months, or both. People who are found not wearing a mask or not wearing a mask properly outside their place of residence can be fined not more than $10,000 and jailed for up to six months under the Covid-19 (Temporary Measures) (Control Order) Regulations 2020. /TISG