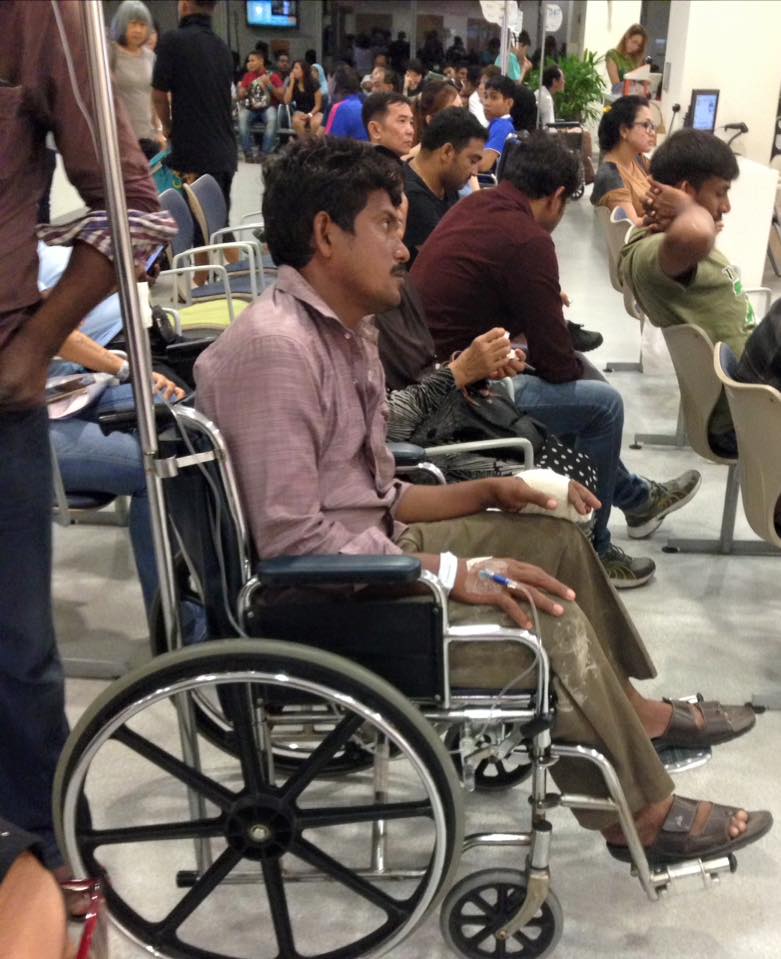 Facebook user NiNi Narina YrflowerGirl shared about her experience at Khoo Teck Puat Hospital on March 3.
She and her brother and sister had brought their mother to the hospital for stomach flu when they saw a man, who was presumably a construction worker, with a badly injured hand.
She wrote in her Facebook post:
“I saw an Indian worker walk in, with two other Indian workers.
“One of them had his hand on the left covered with a handkerchief. And the handkerchief was covered with blood.
“He was walking back and fro from the registration counter and the toilet.
“Probably because he don’t know how to stop the bleeding.
“So many people witnessed him.
“He looked very very tired and exhausted and looked very faint.
“I looked at him with very disheartened emotions.
“The doctors and nurses saw him but no one went to ask if he was okay.
After seeing his condition and that he was bleeding profusely, NiNi made a fuss to her brother who personally went to the counter to alert a nurse.
She continued:
“Only then, the nurse attended to him.
“After checking him, he went out with some kind of wrap that the doctor provide, to stop his bleeding.
“To my shock, the nurse came back to my brother and said, “he actually broke his bones”.
“From then on, I kept a lookout for him, in case he needed urgent help.
“HIS BOSS ARRIVED LATE, and WENT BACK EARLY and DID NOT EVEN ACCOMPANY OR ASK HIM IF HE IS FINE OR NOT.
“No sense of humanity huh?”
After settling her mother’s paperwork, she noticed the man had his injured hand stitched and bandaged and was on a drip.
However, she noticed something was not right:
“He was very pale, and sick, and tired, and sleepy.
“I literally kept a look out for him because I guess not all will actually gave a helping hand to such person.
“Simply because SOCIETY IS JUDGMENTAL.
“As we were waiting, I saw his drip had stopped.
“I told my sister and my sister went to the nurse and told the nurse about him and his drip.
“The first time, the nurse ignored so we just kept quiet.
“The next time I looked at him, inside the tube that was connected to his dripp, there was blood.
“So I told my sister again. She went inside and told the nurse who went out to adjust for him so that the drip would continue as normal.
“While waiting again, the drip stopped.
“My sister went into the room again, and informed the nurse about it.
“The nurse didn’t come out and attend to him, though she acknowledged my sister and said, “OKAY”.
“We thought they were preparing another drip bottle. But no, They didn’t and attended to others.
“The next thing, I saw his tube was covered with more blood.
“Like literally blood flowing out inside the tube.
“I told my sister to quickly call the nurse.
“Only then the male nurse came out and took out the drip.”
NiNi said that she just wanted to tell everyone that sometimes, “you need some sense of sympathy and humanity”.Follow us on Social Media