88-year-old karang guni woman was almost hit by passing cars, a Malay man helped her and what happens afterwards is priceless 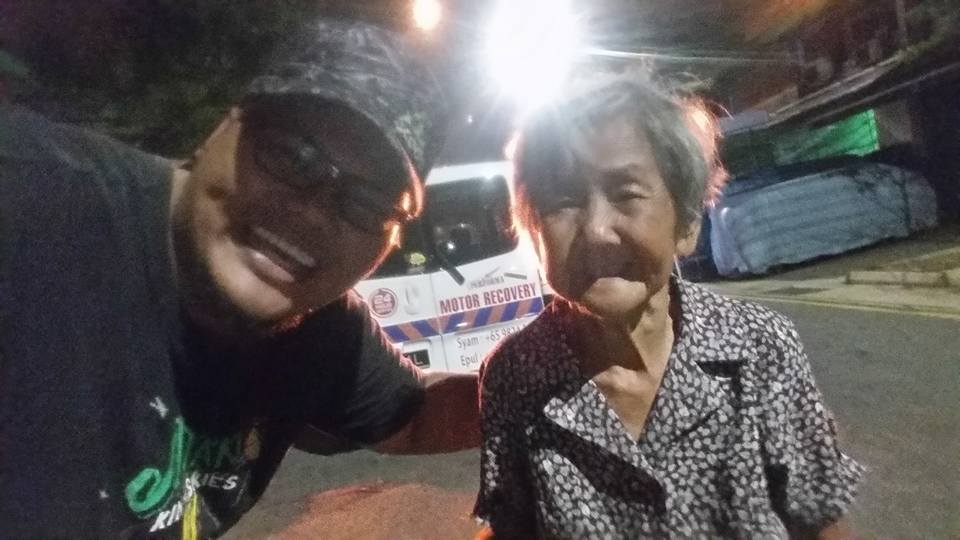 A trolley rolling down the middle of the road caught van driver, Syam Sj’s attention. Then he saw another bigger trolley behind the first one, and an old, frail woman trying to push both trolleys while trying to cross the road. As no one else came to the aid of the old woman, Syam decided to help her.
Writing on his Facebook, Syam said the 88 year-old woman almost got hit by passing cars as she was pushing the trolleys in the middle of the road in Toa Payoh. The trolleys filled with old, discarded items and large cardboard boxes almost covered the old woman who was pushing it.
The 88-year-old was waving her hands frantically shouting, ‘uncle boleh tolong saya, uncle boleh tolong saya!’ (translated: uncle, can you help me?)
Syam stopped his van and helped her push the first trolley to the pavement. Once the old woman was safely on the walkway with the other trolley, he asked her where she was going. When the old woman told him where she was headed, Syam realised that it would take her one-and-a-half hours for her to reach her destination by foot, and decided to give her a ride in his van instead. “It was only a 5 minutes drive,” he said on his Facebook.
In the van the old woman told Syam that she had lost contact with all her children, and that her meals consist of ‘kueh pau and teh’ (steamed buns and tea). She makes ends meet by searching for unused items to sell.
Syam was moved by one of the replies of the old woman during the trip.
Syam: aunty you angkat barang kenapa banyak sangat? Satu orang dua trolley. You sudah tua makin sakit. (Translated: aunty why do you take so much stuff? One person but two trolleys? You are old and are not well as well?)
Old woman: Chinese new year sudah mau datang. Saya harus kerja kuat kuat nanti dapat wang lebih boleh beli makan sedap. Boleh kasi wang sama budak budak. (translated: Chinese New Year is coming. If I work hard, I can earn more money and eat well. I can also give some money to little children.)
Syam said on his Facebook page that he helped the old woman to a place where she could sell the items she had picked up and that till then, he never knew that the life of ‘karang-guni’ (rag-and-bone collectors) can be so tough.
At the place he also helped her sort the items, “like papers with papers, cupboards with cupboards, and metals with metals”. When he got some wrong at times, the old woman did scold him.
In his enthusiasm to help the woman, Syam had not noticed that he had parked his van against the flow of traffic, and almost got into trouble with the police for doing so. But when they realised that he had done so to help the old woman, the police let him off.
When he finished all the sorting, the old woman would not stop thanking him. “thank you uncle, thank you uncle. Tak ada orang tolong sama saya cuma you sahaja. Wahhh! saya happy la ini hari.” (translated: thank you uncle, you came to help me when no one would. I am very happy today.)
When Syam handed her some money as he was leaving, the old woman was moved to tears. “I asked you for help, not money. I asked your help to carry stuff because I am old and weak, not for your money,” she said.
To which Syam replied, “don’t worry, keep the money. Get yourself good food. Bak kut teh (pork bone tea) or whatever you want to eat. Get yourself good drink like wheat grass or soya bean. I don’t want you to eat kueh pau and drink coffee tomorrow. Have something good for yourself. Prepare yourself for Chinese New Year. Buy what is necessary.”
Her expression when he said that was priceless said Syam. She was smiling, and there was a little tear drop in her eye. She wouldn’t stop saying, “uncle thank you, uncle thank you”. And Syam left after wishing her, “kong xi fa cai”.
Syam said that the old woman’s face is stuck in his mind. It could be the widest smile of the old woman in a long time, he thinks.
“I thank Allah for letting me meet this aunty and giving me the chance to help her. Things happen for a reason. Kindness start with oneself. We may be of different colours but kindness need not be differentiated by colours. Alhamdullilah everything is smooth. Aunty reached her destination safely,” said Syam in reminding every one who read his post that “happiness starts with you”.
Syam said that the old woman asked him to take some pictures of her saying the photos will help him remember her. And if he misses her, he can always take a look at the pictures.