JUNZI (君子) or “By any means necessary” approach to politics 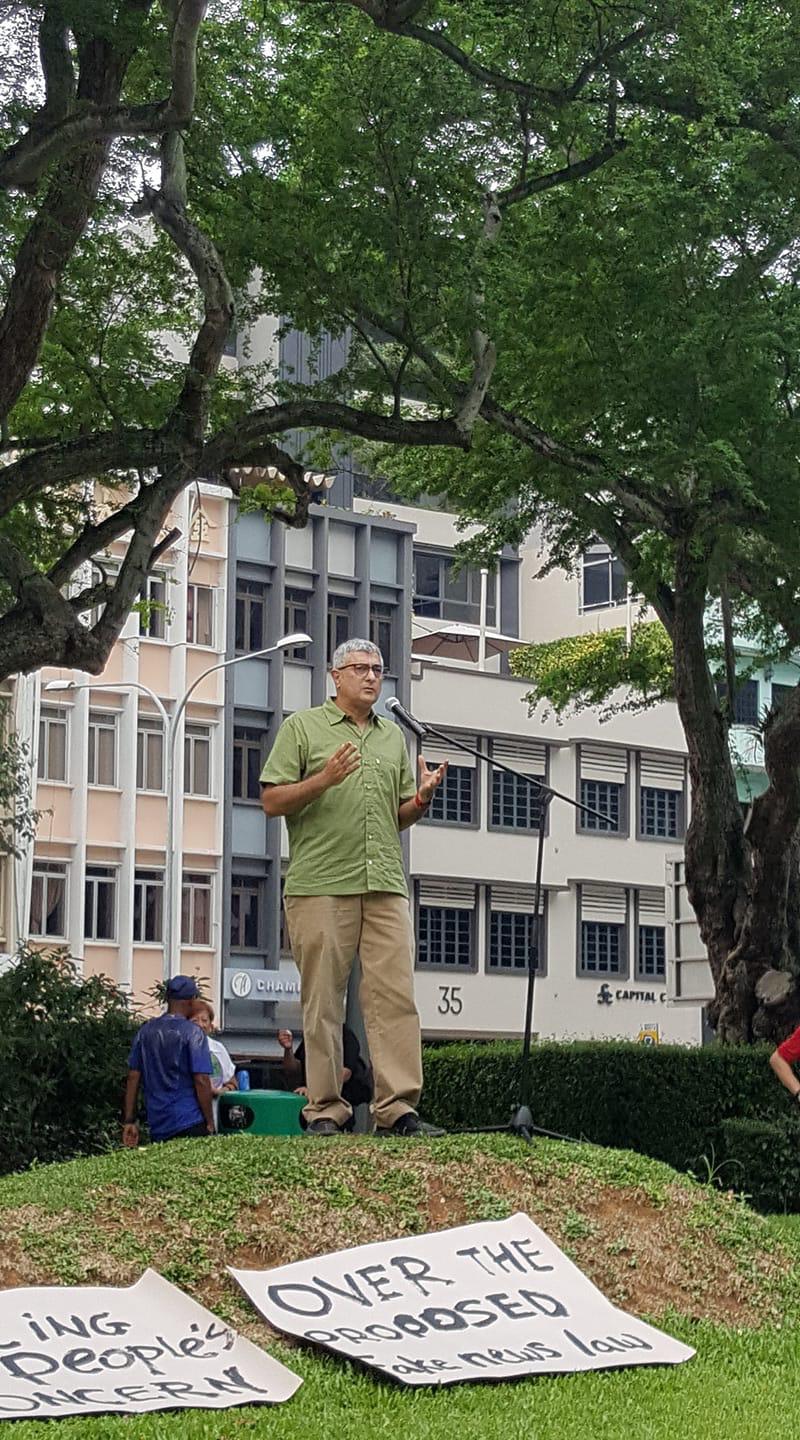 The PAP Government pontificate that their approach to politics and Government is that based on a Chinese concept of government by honourable men (JunZi), who have a duty to do right for the people, and who have the trust and respect of the population.

The JunZi (君子), literally and some would say most appropriately means ‘Lording Master’ or “Son of the Prince” is a Chinese philosophical term often translated as “gentleman” or “superior person” used in the I-ching and Confucius in his works to describe the ideal man. (See https://en.wikipedia.org/wiki/Junzi)

The Singapore Government touts this Chinese philosophical term as our “National ideology” to mean the “politics of virtue” based on considerations of excellence of character.

The PAP Government pontificate ethics and morality singing songs about integrity and doing the right thing.

They say this Confucian based idea fits us better than the Western idea that a government should be given as limited powers as possible and should always be treated with suspicion.

Trust us they say. We are honourable men. Men of high ethics and integrity. “Whiter than white”…..

Confucian Junzi leadership is apparently why members of the PAP government say they must bring defamation suits to defend their integrity to avoid losing their moral authority.

Do they practice what they preach? Do their words match their deeds?

Contrast the PAP’s claims with the view that I read in today’s papers in the article linked here about increasing unscrupulousness and authoritarianism in the UK and US in the form of a “by any means necessary” approach to politics where the “ends justify the means” that has sheer contempt for the rule of law and the checks and balances you get from the separation of powers in the following terms:

“Facing divided, radicalised and unconvincing political opponents, the Trump-Johnson strategy could yet triumph. That strategy, it should now be clear, involves contempt for the rule of law, the trashing of national institutions, fostering an atmosphere of violence and deliberately widening bitter divisions within the country.”

The Florentine statesman, Machiavelli, in his book “The Prince” advocated the ruthless doctrine that the ends justify the means. According to Machiavelli, it is justifiable to go to – any extent- for achieving a good cause.

The consequences of this attitude to government as opposed to the “politics of virtue” propaganda became clear when we test the rhetoric of the PAP Government against the reality that Singapore’s economic miracle was delivered over the suffering of many innocent Singaporean’s.

The PAP Government has presided over an unprecedented economic boom that swept the globe after global stability was reestablished after the ravages of World War II. However, I am equally if not more troubled by how the PAP Government achieved our sucess and all that they did in the name of progress for Singapore.

They made many good decisions but do the ends justify the means?

Let’s take just three examples where the propaganda of “JunZi” did not match the “by any means necessary” deeds of the PAP Government to support my argument.

The abuse of power is not JunZi. The imprisonment of political opponents by the PAP Government is the best example of how the Junxi rhetoric does not square with their track record of abuse of power.

The maxim “the ends justify the means” can summarise the view that the PAP Government have done many many bad things to good people supposedly in the “national interest”.

Here are three instances over many years where the modus operandi of a threat of communist insurgency has been used several predictable times to usurp or otherwise retain power.

In 1963 in a covert security operation called “Operation Coldstore”, a total of 113 people were arrested and detained without trial under the Preservation of Public Service Security Ordinance during Operation Coldstore in 1963. Those detained included 31 in the political sphere including Lim Chin Siong, James Puthucheary, Lim Hock Siew and Poh Soo Kai.

Surely there is nothing very JunZi or honourable about this way of dealing with political opponents is there?

Then in 1966, it was again the PAP Government led then by Lee Kuan Yew that imprisoned former member of parliament for the now-defunct Barisan Sosialis Dr Chia Thye Poh and 22 other Barisan Sosialis leaders under the Internal Security Act for allegedly conducting pro-communist activities against the government. Dr.Chia Thye Poh was detained for 32 years; imprisoned for 23 years without charge or trial and subsequently placed under conditions of house arrest for another nine years. Chia was never released because he protested his innocence and refused to sign a forced confession, which would have implied that that he was a violent communist.

This cannot be the advertised politics of virtue.

Another very dark episode of the PAP Government’s predilection for use of the “by any means necessary” approach to governance can be seen in Operation Spectrum, also known as the 1987 “Marxist Conspiracy”, which was the code name for a covert security operation in which 22 people aged eighteen to forty, were arrested and detained by the PAP government without charge or trial under the Internal Security Act. They were accused by the government of plotting a Marxist conspiracy to overthrow the state. Confessions were made and then recanted detainees saying they had been made under duress. The accused were a mix of activists, Catholic Church members, social workers and theatre performers. Some had ties to the rejuvenated Workers’ Party.

32 years on, the arrest and detention without trial of these 22 hapless people and two of their lawyers later has never ever been substantiated by a single iota of credible evidence. The episode remains shrouded under a fog as opaque as the PAP’s mysterious black box of never to be explained imponderables.

Many people hold the view that the allegations were a deliberate falsehood perpetrated by the PAP government.

Is this what they mean by “JunZi”?

These detainees over each “covert operation” described have always maintained and protested their innocence.

You can never justify the imprisonment of your political opponents for crimes you did not prove they committed. That’s not an “honourable purpose” but rather a dishonourable abuse of power.

Let’s look at how the PAP Government have for years vilified Chee Soon Juan currently the Secretary General of the SDP.

For so many years, the PAP controlled mainstream media demonised him. I will spare everyone the gory details as that would only dignify their attacks. The late LKY cruelly and mercilessly persecuted him.

How they have for years manipulated Singaporeans, persecuted their political opponents, destroyed lives to maintain near absolute control and power.

Do the ends justify the means? JunZi?

To me even the noble end of nation building cannot justify the ruthless means deployed to demolish political opponents. Sorry, I cannot agree. Is this what the PAP Government means by the “politics of virtue”?

However, the other side of the story about this man who sacrificed nearly all to serve Singapore starts to emerge all thanks to new media and the Internet.

See this You Tube Video: https://youtu.be/6J0b4nDrQL0

In Chee and his life story you can see reflected much that is abhorrent about the PAP. Chee like any of us is far from perfect but the demolition derby unleashed upon him by the State machinery and how this affected his young family can never ever be justified.

All Chee ever wanted was to have an alternative voice in Parliament to champion more freedom for us here.

It saddens me knowing how badly this son of Singapore was treated by his own country. How they stripped him of his humanity….and for what? Absolute political power.

Are these dark days finally over? I sincerely hope so but I doubt this.

How many more lives does Singapore need to demolish in the name of PAP “progress” for our nation?

The racially charged debacle that put our President in her place in the highest office in the land without a single Singaporean voting for her amounted to a Constitutional farce.

The race-based Presidency that the Prime Minister and his colleagues in the Government championed again further entrenched race-based politics into the highest office in the land. It has instead led us to a remarkable inflection point in our nation’s history that simply does not inspire racial harmony in the least but rather has sowed racial discord with so many voicing their anger over the railroading of this Constitutional pantomime.

The special provisions and qualifying criteria that were mooted purportedly to guarantee that the highest office in the land is – accessible and attainable – by members of the country’s minority communities but have instead as it turned out clearly been proven to be anything but that as the office proved to be neither accessible nor attainable by members of at least the Malay community in this Presidential Election fiasco except for miraculously the selected one.

The PAP was the ultimate winner of this Constitutional farce as it has taken one more major step to consolidate its power. This surely cannot be what a government by honourable men (junzi) who have a duty to do right for the people and who have the trust and respect of the population are supposed to do?

In conclusion I would say that the PAP Government are in no position to lecture anyone about ethics or integrity.

At the heart of Singapore’s success is the blood of many innocent lives. The success of Singapore is tainted with innocent blood drawn by the PAP Government and all this talk of honour and integrity ring hollow against the screams of those who have suffered unspeakable horrors in their dirty hands.

The PAP Government are the champions of the “by any means necessary” and “the ends justify the means” brand of politics not the “JunZi” “politics of virtue” Fake News they advertise.

I leave you with a cartoon strip that tells you why a government that practices “the ends justify the means” brand of politics cannot justify the hypocrisy of their “JunZi” “politics of virtue” mantra.

A version of this article first appeared on Khush Chopra’s Facebook page and is reproduced here with permission.

JUNZI (君子) OR ”BY ANY MEANS NECESSARY” APPROACH TO POLITICS Do the ends justify the means?The PAP Government…