Joko and Metallica: Why are Singapore leaders so boring? 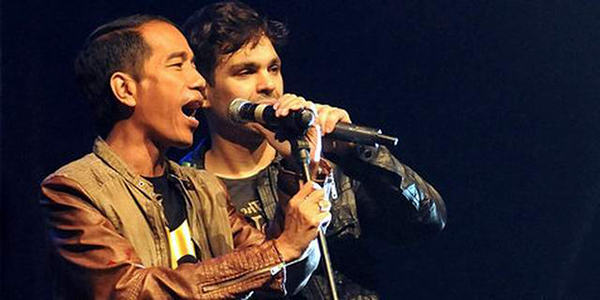 Joko “Jokowi” Widodo, Metallica fan. Serious. That news picture showing a smiling Indonesian president as he received from the Danish PM on Wednesday a re-mastered box set of US heavy metal band Metallica’s 1986 album Master of Puppets made my week – and set me thinking.

A spokesman said the Indonesia’s leader was “pleasantly surprised” by the unusual diplomatic gift from Danish counterpart Lars Lokke Rasmussen, who was in Jakarta on an official visit. The box set was signed by Metallica drummer and Danish native Lars Ulrich, a founding member. The 56-year-old Jokowi is a well-known Metallica fan – several years ago he received a signed guitar from the band’s bassist Robert Trujillo. He plays a bit of rock guitar himself and often wears Metallica T-shirts, like any smitten fan.

I hope my Malay friends will not hantam me but talk about a Mat Rocker, bro! Rock on!

Jokowi is not the only Asian leader who is a devoted and unabashed fan of pop/rock musicians. The former Japanese PM Junichiro Koizumi was an admirer of Elvis Presley. This was what he wrote to the Elvis Presley Fan Club (Tokyo):

“Yes, I really love Elvis…. He is the best and a class by himself when he sings rock or ballad or any type of songs. I never get tired of listening no matter how many times I hear him over more than 40 years in my life. Above all, I like his songs, say, ‘I Want You, I Need You, I Love You’, ‘Hawaiian Wedding Song’ and ‘Bridge Over Troubled Water’.  Whoops! I almost forgot to say this: my birthday is January 8, the same day of Elvis.”

As far as I have read and known, not one of the three prime ministers we have had so far has ever shown any such passion for anything that any ordinary Singaporean can relate to. Playing a round of golf or two is to me nothing one wants to boast about in politics.

Former President Ong Teng Cheong was a good pianist. And we all know his wife’s favourite song was Teresa Teng’s The Moon Represents My Heart. Former Speaker Tan Soo Khoon can sing and play the guitar. I saw him doing a decent stage rendition of The Drifters’ Save The Last Dance For Me. He managed to get the crowd on their feet with this song at a National Museum function sometime in the 1990s.  And I once went down to a pub in Katong to check on a tip off that the late Law Minister Edward Barker liked to pop in every Thursday to jam with some musicians there.  And so he did, complete with his special Fender guitar, and an impromptu backup band.

Other than these people, I strongly suspect most of our leaders do not seem to have any sort of real life or interesting passion that they can happily or proudly share with the public. They are unbelievably one-dimensional and even cardboardish.

This is why they cannot genuinely connect with people and tend to talk down or be dismissive of rather than be part of them.

Or if they even attempt to relate, say, through Facebook, they come out sounding fake and contrived, as if they are paying someone to do the job for them (which they most likely are). Or worse, they depend on ghostwriters who themselves are group-thinkers totally out of touch with the ground.

You know, it is quite scary. We don’t know anything very much about the so-called 4G leaders from whom would emerge the next PM. They have shared next to nothing about their growing up passions which can resonate with others, the way Jokowi and Koizumi have.

No colour, no personality, sadly uninspiring.

Great that Liu Thye Ker is setting up his own firm, with the aim of trying to imbue younger architects with his work philosophy and design ethos. In other words, the former Mr HDB and “architect of modern Singapore” wants to show how cities and spaces should be ultimately liveable and be part of an evolving story, whatever the design concept.

Liu has had important stints as head honcho of the HDB and URA. He has considerable influence over the development of the country’s architectural landscape.

I am a bit mystified that he, as a person who believes in preserving and promoting local colour, could not prevent the tearing down of at least two iconic buildings – the National Theatre and the grand Adelphi Hotel.

Other than that, I wish him every success in his new endeavour. At least he has passion.