In the tweet posted on Hari Raya day, the prince said only the Johor royalty was worthy of wearing a Baju Melayu Teluk Belanga with black pants

The controversial Tunku Mahkota Johor, Tunku Ismail Ibni Sultan Ibrahim got himself entangled in yet another online bashing situation from Twitter followers with a post which appeared to tell the rest of Malaysia where their place is and that only the Johor royalty can wear black pants for Raya.

In the tweet posted on Hari Raya day, the prince said only the Johor royalty was worthy of wearing a Baju Melayu Teluk Belanga with black pants and he made a comparison between an eagle and a sparrow flying at different heights, adding, “You better know your place and let those dreams be lower than the height of the grass.”

In his post the prince also said officials may not wear black pants, and the post is an advice given to him by his grandfather and the outfit is part of the Johor royal bloodline which is being copied by others who want to be ‘royals’.

Twitter followers replied to the prince with cynicism, asking him who are those who should know their place and posted photographs of Malays wearing a Malay outfit with black pants during the Raya celebrations. 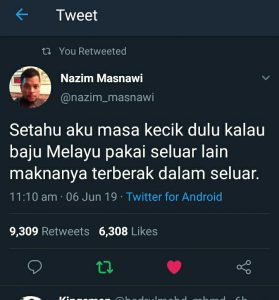 Others says “We shoud accept, they are royals we are the rakyat ????,” with laughing emoticon probably signifying a joke.

One @nazim_masnawi said the only time kids change their Raya pants colour is when they get dirty.

The backlash is enormous with thousands of re-tweets and 1,500 mostly nasty comments.

Some say TMJ, who has over 88,200 followers on Twitter, should keep his grandpa’s advice to himself and they have their own grand fathers to advise them. 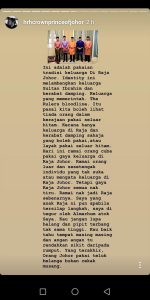