The Independent News
Home News Featured News Is there "fierce infighting" going on behind closed doors at the WP?

Is there “fierce infighting” going on behind closed doors at the WP? 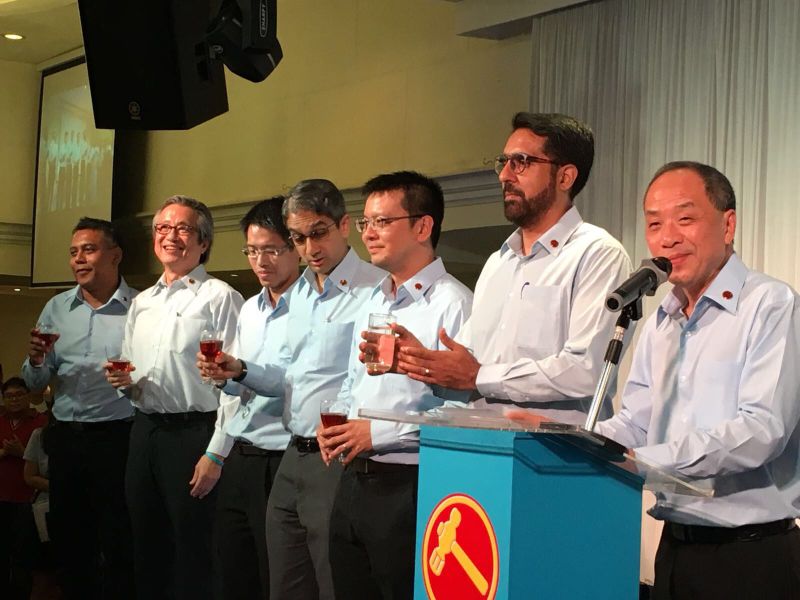 An anonymous screenshot of a text message alleging “fierce infighting” within the Workers’ Party has been circulating online, even as the party gears to elect its new secretary-general, this April.

Veteran politician Low Thia Khiang, who has served as the WP’s secretary-general since 2001, confirmed at the party’s 60th anniversary dinner last November that he will not contest the next election to “make way for new blood”.

While assistant secretary-general Pritam Singh appears to be the favourite to succeed Low, there is some speculation brewing online that Singh’s path to clinch the top role may not be entirely smooth.

As members of the public speculate on who the other contenders could possibly be, an anonymous alleged Telegram message making wild suggestions about some party members has been circulating online:

Received this on telegram

According to a source within WP, a fierce behind-closed-doors infighting is ongoing. Two of the three front runners, Chen Show Mao and Dennis Tan have remained silent, while Daniel Goh ruled himself out as a distraction, choosing to “root” for Pritam Singh grudgingly as he views Dennis Tan as a threat to his Long term ambitions.

A key reason infighting between CSM and Dennis Tan is because Dennis is Low Thia Khiang’s favourite. And Low blames Sylvia for bringing in CSM, “overshadowing” him at GE 2011. Most WP cadres initially prefers CSM to be the next Sec-Gen due to his better credentials (Rodhes Scholar) over Dennis, but these cadres have been removed by Low at the last party conference. CSM brings to the table a host of experience as a previously high flying lawyer, handling multi billion $$ deals. As he tried to probe into Town Council matters, he was side-lined by Low. This has further deepened the rift between those two. Many WP members object to Dennis Tan because they are worried that he is not grounded enough, and Pritam, too young and not steady.

Dennis Tan is still Low Thia Khiang’s favourite as he has demonstrated his loyalty. During EXCO meetings, CSM has repeatedly expressed reservations over the payment methods at TC – dampening the mood of Low. Sylvia is caught in between as she has recommended CSM, and had expected CSM to back her for her own bid to take control of the party. Sylvia is also upset with CSM asking about TC funds.

Cadres are also puzzled when Low praised Dennis Tan, asking themselves “How Dennis has contributed”, they feel that he is aloof and has very weak communication skills.

Although his first choice is not Pritam Singh, Low wants Pritam because Pritam listens to him. Low is afraid that his legacy will be destroyed by the seemingly righteous CSM and is strongly wary of CSM’s inseparable bond with his residents at Paya Lebar. He knows that without CSM, they would have lost Aljunied GRC in 2015. Ultimately, Low is hoping that the cadres Re-nominate him as Sec-gen given the circumstances.

The next Sec-gen should be announced by April this year and it shld be interesting to watch as the weakened party sought to “elect” its new leader.

It is interesting to see how fast fake news can be created and shared around. Saw this online already, calculated to cause mischief. It’s not amusing though when people names are involved and the content are utter nonsense; a pure work of fiction without any basis.

I recall during GE2015, loads of fake messages were circulated, such as WP winning East Coast and Marine Parade by landslide margins according to the bookies and other messages calculated to cause concerns amongst certain voting groups about WP’s policies on moral issues or the character of some of the candidates. People nevertheless believed these very seriously. I had received some calls and messages asking me to verify our policy stand from concerned voters. Obviously, those messages were fake and deliberately skewed to confused our policy positions. And even though so many circulated the messages of bookies giving odds for WP to win new seats by good margins, I do not know of anyone who actually managed to place any such bets with these so-called bookies.

I received a message one day in the heat of the campaigning by someone expressing disappointment with statements I had allegedly made in public. Puzzled, I asked to see what the statements were about. A while later, an apology came back saying that someone added words to what I had said and circulated that. He received from more than one person and hence believed it to be true. I never got to see what those statements were anyway but am glad to know that at least I was given that opportunity to clarify and the person bothered to check the truth after that.

It is interesting to see how fast fake news can be created and shared around. Saw this online already, calculated to…

Goh, however, opined that Dennis Tan could be Low’s first choice, “else he won’t be slated to contest in Hougang for next GE.”

Low has remained mum about who his likely successor will be. He has only said that this is something for the party to decide.

Someone wrote this. It is somehow illogical because even SG of a political party cannot just anyhow remove cadre…