Is Fandi Ahmad used as ‘pawn’ in FAS elections? 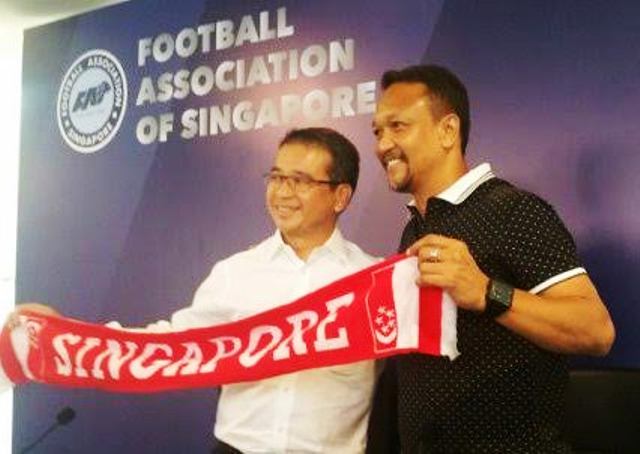 FANDI Ahmad, the “Son of Singapore football”, is reportedly embroiled in a new row in the run-up to the Football Association of Singapore (FAS) elections.

The 54-year-old, who  signed an unprecedented three-plus-three-year deal to lead the younger generation to the 2010 Tokyo Olympics, has been alleged to be used as a ”pawn” to win votes by the incumbents, in a formal protest letter, submitted to the FAS.

Gymkhana FC, one of the leading clubs playing in the Islandwide League (IWL),  have concerns that there may be plans to use Fandi for the election campaign, later this year, wherein there’s a mandatory clause that FAS staff, full-time or part-time, cannot be engaged in electioneering.

Mr Alfred Dodwell, legal adviser to Gymkhana FC, said that FAS Vice President Edwin Tong at the unveiling of Fandi Ahmad as an ambassador, said that the grassroots popularity of Fandi will be used to convey to the lower-rung clubs that the FAS cared for their longer-term development.

Mr Tong reportedly said: “He will also play an ambassadorial role to engage various stakeholders in the football ecosystem and bring them on board our vision…”

Mr Dodwell slammed: “Whose vision is he referring to? As elections are afoot, surely he could not mean FAS current vision. We would raise objection to the use of Fandi Ahmad in any manner whatsoever to be campaigning on behalf of the incumbent FAS team as that would be an abuse of FAS resources for electioneering.”

Gymkhana FC, with a sizeable of support from the heartlander clubs, intend to seek an explanation of this statement and the role and ambit of duties and outreach that Fandi Ahmad is going to undertaken prior to the elections at the EOGM, at the November 7 extraordinary general meeting.

“We would forewarn that Fandi Ahmad cannot be used as a pawn. He is a paid staff of FAS and he should not be used for any reason for election purposes and this would equally apply to Winston Lee as the Secretary General and all staff and resources of FAS should not be used in any manner whatsoever on behalf of any slate team or individuals contesting the upcoming FAS elections,” says Mr Dodwell.

Fandi, who is currently assisting national head coach V. Sundramoorthy in preparing the Lions for the upcoming Asean Football Federation Suzuki Cup, was not available for comment.

Fandi’s popularity and coaching track record stands out, right from the grassroots. The former national football captain had also previously coached the Young Lions, then the national Under-23 team, from 2003 to 2006, leading them to two third-placed finishes in the S-League – their best-ever showing. He rejoined the FAS in late 2013, succeeding current national caretaker coach V. Sundramoorthy as coach of the now-defunct LionsXII. He also led the team to victory in the Malaysia FA Cup.

Hugely popular and highly-respected in the Lions’ dressing room, Fandi, who was also decorated “S-League Coach of the Year”, has played a crucial role in the development of the younger national players like Gabriel Quak, Madhu Mohana, Izwan Mahbud and Faris Ramli.

Even celebrity football analyst Neil Humphreys rates Fandi as a global icon, along the lines of Singapore’s version of Bobby Moore, a “sporting giant whose fame transcends the local game itself, a Singaporean footballer without peer and a gentleman beyond compare”.

In arguing for a longer-term role for Fandi, he recently wrote: “Malaysia admires him, Indonesia respects him and Groningen remembers him. Singapore, on the other hand, still isn’t entirely sure what to do with its finest football son.”

But close friends say Fandi, who is revered from politicians to the man-in-the-street as a “Son of Singapore Football”, is unlikely to be engaged with football election politics. “He’s too smart for that,” said a family friend. “He will never take sides and will only work for the betterment of Singapore football.”

Another family friend, who has known him for more than two decades, said: “Honestly, Fandi has not been on the best terms with the FAS as they have not treated him rightly in recent years. So it’s unlikely he will do any campaign work for FAS, as he knows, too, that morally, he cannot do so.”

Perhaps the FAS incumbents, who are trying to swing late club votes in their favour, hope to use Fandi’s “kampong hero” tagline to their advantage. He is the only Singaporean who has flirted with clubs such as Boca Juniors and Ajax Amsterdam before signing for FC Groningen in 1983 on a two-year contract, becoming the first Singaporean to play for a European club professionally.

And more importantly, Fandi’s fluency of English, despite low academic qualifications, and his fast-growing global diplomatic skills makes him a superlative home-grown “bola” perfectionist. Unconsciously, he’s capable of raising the hearts and souls from football fields, in classrooms to community centres, even in the print, broadcast or social media.

A senior FAS council member, who asked not to be named, said: “The FAS staff, full-time or part-time, knows the clear guidelines that they must stay neutral and objective and not be involved in any election campaigning for any party. It would not only be unprofessional but they risk getting sacked if they do so.”

Indeed, along the corridors of Jalan Besar Stadium, inside sources said that there’s a “nervous mood” with the first-ever democratic elections in over three decades. As much as the grassroots clubs are excited over this prospect, the FAS staff appears to be in apprehension over the overall fate of football.

A senior coach, who asked to be anonymous, said that “it’s high time for a change but those coming in must show real passion in developing every strata of football”.

“There’s been too many wrongs a very few rights in the way FAS has managed football. The national team has not performed well, the S-League continues to see sorry crowds and majority of the affiliated clubs feel that they’ve not been recognised for their grassroots development of football.”

In my opinion, as a final ticking, let me say there’s only one Fandi Ahmad. A football version to founder-father Lee Kuan Yew. He cannot and must never be used as a “pawn” for electioneering but his footy skills can fire up and inspire the next younger generation of football-minded Singaporeans, who must be convinced that there’s a longer-term sporting culture.

—
Suresh Nair is a Singapore-based journalist, who covered Fandi Ahmad as a 15-year-old when he made his Lion City Cup international youth debut in 1977.