Deputy Prime Minister Heng Swee Keat revealed on Facebook on Tuesday (10 Dec) that Ip Man star Donnie Yen wished him a Merry Christmas and Happy New Year while he was in Singapore to promote his latest film, Ip Man 4: The Finale.

The 56-year-old Hong Kong actor and martial artist turned up for a meet-and-greet at Our Tampines Hub on Monday night (9 Dec) and was swarmed by over 5,000 fans who uproariously welcomed him after being treated to a screening of earlier Ip Man installments and a Wing Chun martial arts demonstration.

Accompanied by his wife, Yen also unveiled the Ip Man Pavilion at Our Tampines Hub. The Pavilion, which is modeled to resemble Ip Man’s living room and serves as a gallery of shots from the Ip Man film series, is open to the public until 6 Jan.

“I really appreciate from the bottom of my heart as an actor as a filmmaker. You know, sometimes we strive for perfection, but the perfections cannot be perfect without the love from all of you.”

Tampines GRC MP Heng Swee Keat has since revealed that Yen left a message for him in a guestbook. 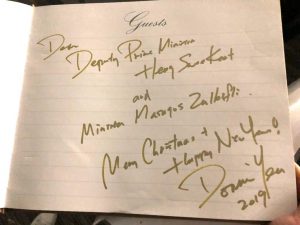 Mr Heng, who is on two weeks’ holiday, was not at Our Tampines Hub during the meet-and-greet, which was attended by fellow Tampines GRC MPs Desmond Choo and Cheng Li Hui. He, however, stopped by the Ip Man Pavilion last weekend and took a picture that shows him appearing to go “toe-to-toe” with Ip Man.

Sharing the photo on his social media page, DPM Heng wrote: “Went toe-to-toe with Donnie Yen when I visited the Ip Man Pavilion at Our Tampines Hub over the weekend! Had a lot of fun with the 3D trick-eye illusion and iconic sets from the previous three Ip Man movies.

“Give your best Wing Chun pose with the wooden dummy in Ip Man’s living room or on the round table (as seen here) where he sparred with Sammo Hung in Ip Man 2!”

Ip Man fever descended on Our Tampines Hub last night! More than 5,000 fans from Tampines and all across Singapore…

Singapore – A video of a woman holding up an umbrella for passengers exiting a bus to keep them dry from the rain has warmed the hearts of the online community. On Sunday (Jan 24), Facebook page ROADS.sg uploaded a video with...
View Post
Featured News

Singapore -- A woman looking for the family's pet Pomeranian was devastated to see a three-metre-long python wrapped around the dog near her Holland Link residence. The 39-year-old Australian national shared with zaobao.com her experience of searching for the dog, called Mia,...
View Post
Featured News

Here we are at a very interesting week – with a couple of events both local and abroad which have repercussions for what lies ahead. Decisions, decisions, decisions. There’s Donald Trump. He’s out. Maybe not down yet. He says “We’ll be back.”...
View Post