A video showing a group of North Indian tourists harassing a Singapore tour bus driver for refusing to overload her vehicle is going viral on social media. The incident appears to have taken place at Hotel ParkRoyal on Kitchener Road – a four-star hotel located near Mustafa Centre at Little India.

Facebook page All Singapore Stuff, which uploaded the video to social media this afternoon (2 Jan), said that the tourists began bullying the female driver after she refused to load extra luggage and a wheelchair onto her 13-seater vehicle since overloading the vehicle would be dangerous for her passengers.

The page said: “Singapore driver bullied by Tour Group for refusing load extra luggage on 13 seater…then they brought another wheel chair to put on top of luggage…driver refused as it is dangerous for passengers sitting inside due to sudden brake can drop (sic)…but family started (sic) shouting at driver.”

In the video, which is taken by the driver, a vehicle can be seen parked at the pick-up point of ParkRoyal on Kitchener, with a crowd watching the commotion unfold. A large family can be seen loudly arguing with the driver and refusing to clear their items from the vehicle, even after they are told that the tour bus management is sending them a larger vehicle.

One of the tourists, a middle-aged woman, can be seen standing inside the van shouting that the driver “cannot scare us by recording us” when the driver resorts to filming the rowdy group.

The driver repeatedly states that they have to clear the vehicle since she is responsible for it but one of the men in the group retorts that she should just ferry them since they are the passengers and they can manage any problems that arise from overloading the vehicle with their items.

The exasperated driver just tells them that she is responsible for the vehicle and that they should get away from the van. Another man from the group then tells the driver that he is calling her superiors before one of the young children in the tourist group also yells at the driver.

Parkroyal staff can be seen trying to intervene and resolve the commotion but the tourists remained irate. One of the women exclaims in Hindi: “This is such rude behaviour isnt it? She is creating problems for tourists. In no country can you trouble tourists like this. This is such filthy behaviour!”

Parkroyal staff confirmed with the driver that a bigger van was coming but the tourists remained angry and demanded answers as to what they should do if the other vehicle does not show up.

Hotel staff then managed to send the driver on her way but the tourists took their time removing their luggage from the van. When the driver asked the children to take their bags out of the vehicle, one child sarcastically retorted, “That I will take! That I will take!”

One of the men in the group then approaches the driver, blocks the door from closing and starts recording the driver. He tells the children that they should film the driver since she is filming them. This man then proceeds to stand in front of the vehicle, not allowing the driver to move off from the pick up point momentarily.

<Reader's Contribution by Lim>Singapore driver bullied by Tour Group for refusing load extra luggage on 13 seater … then they brought another wheel chair to put on top of luggage … driver refused as it is dangerous for passengers sitting inside due to sudden brake can drop.. but family started shouting at driver. This what's happened..

Posted by All Singapore Stuff on Wednesday, 1 January 2020

The video has garnered over 77,000 views, over 800 reactions and nearly a thousand shares in a matter of hours on Facebook.

Netizens responding to the video on social media were outraged at the tourists’ behaviour and criticised the tourists for not respecting the rules of the country they are visiting: 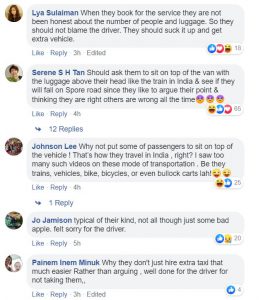 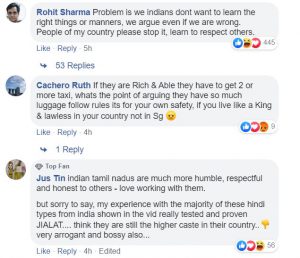 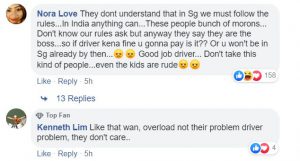