In the absence of Anwar, Mahathir takes centre stage 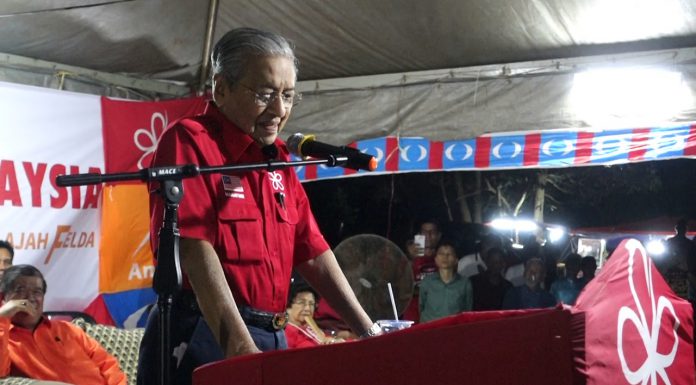 Mahathir Mohamad, the former PM of Malaysia turned opposition leader has conquered the centre-state of the Malaysian political spectrum in no time.

Nominated as the future Prime Minister or PM candidate only months ago, the nonagenarian (he is 92) has simply vaporised some of the major weaknesses seen in the apparent lack of leadership within the opposition grouping.

At this stage, said an observer to The Independent, it is already a fight between Mahathir and PM Najib Razak.

But with the elderly statesman rallying the distracted and diverse opposition group into a solid formation, he has given the Pakatan Harapan a new breath.

Under his mantle, the opposition coalition is tipped to win the states of Kedah, Selangor, Penang while there his presence is already brewing trouble for the Barisan Nasional in Johor and Perak.

In the state of Kelantan, a traditional opposition bastion when the Islamists PAS was against the Umno-Barisan Nasional, the situation is too fluid to call for, said observers who spoke to The Independent.

But Mahathir may not be able to repeat the incredible feat of 2008, when Anwar Ibrahim, then on the sidelines but campaigning for the Pakatan opposition led them to win 5 states.

The opposition group failed to produce the same feat in 2013 in terms of state wins, but it won more of the popular votes and a bigger share of Parliamentary seats.

While winning states has been a major focus of the opposition in the past two general elections, this time around it may not be the same.

In the current state of affairs, Mahathir has apparently set a new rule for the opposition: Focus on Peninsula Malaysia and particularly on the Parliamentary seats.

The strategy is clearly seen in the seat allocation between the opposition parties – with less seats allocated to the Democratic Action Party (DAP) while the PKR of Anwar Ibrahim and the Bersatu of Mahathir gets more than the DAP.

It is a double-edged strategy that will allow the opposition to gain more support from ‘Kampung’ Malays who will realise that the Malay based parties in the coalition has more than 140 seats on their own.

This while the DAP – the Chinese led party that the Umno has set to demonise as anti-Malay thus anti-Islam – will not be able to dominate within the opposition group due to its 40 seats allocation.

This strategy was laid by Mahathir and his party and was accepted by the other opposition coalition partners.

It is a strategy that may give the opposition more Parliamentary seats but this theory will be given a better chance to produce results minus the querrymandering exercise that is ongoing in Selangor and some other states in Malaysia.

With Mahathir now saying that he is willing to be a candidate under the banner of the PKR, the party of Anwar Ibrahim, it adds strength to the opposition.

It also quashes all talks of the ancient animosity between Anwar and Mahahtir and it put the opposition candidates and supporter’s focus on winning seats instead of squabbling over past mistakes.

In this battle between Mahathir and Najib, it is the wit of the elderly statesman that has dominated the headlines, with Mahathir overcoming Najib with his cynical banters.

The strategy altogether galvanised the Malaysians to come in droves to listen to Mahathir wherever he is holding rallies, though at some point these rallies are disrupted by ‘troublemakers’.

Last month, Mahathir was received by hundreds in the state of Pahang.

This was in the constituency of Prime Minister Najib Razak and Mahathir’s speech was accompanied by laughter from the crowd.Follow us on Social Media