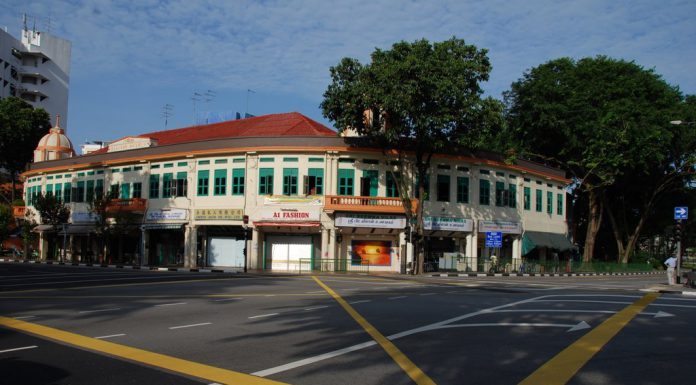 The following is a press release by ICOMOS Singapore on the proposed demolition and reconstruction of part of Ellison Building.

We refer to the authorities’ announcement to demolish and reconstruct three units (nos. 235, 237, and 239) of Ellison Building at the junction of Selegie and Bukit Timah Roads to make way for the construction of the proposed underground North-South Corridor.

Ellison Building was built in 1924. The building consists of 16 adjoining shophouse units. The three affected units completes the Bukit Timah end of its two distinctive curved street corner façades, each crowned by a cupola.

In 2008, Ellison Building was gazetted as a conservation building by URA as part of the Mount Sophia Conservation Area. This fact is proudly highlighted on the URA’s website.

It is regrettable that despite the building’s conserved status, the authorities have nonetheless decided to proceed with demolishing and rebuilding the three shophouses.

ICOMOS Singapore is deeply disturbed by the authorities’ disregard for the heritage value of this building and the lack of transparency behind this decision which is problematic and regressive on the following fronts.

Conservation of our built heritage is an integral part of urban planning and development in Singapore. The restoration of our historic areas adds variety to our streetscapes and modulates the scale of our urban fabric, creating the visual contrast and excitement within the city while protecting the important reminders and representations of our past. In addition, it adds to the distinctive character and identity of our city, giving it a sense of history and memory of place.

For conservation to mean anything, it must act as a deterrent against destruction. That is why the law is invoked to ensure that any violations are prosecuted. Thus, it only stands to reason that any planning proposals must respect the building’s conserved status and work around it. What the authorities have done is nothing short of a volte-face.

The public must assume that a ‘conserved’ building is in fact protected, and not an inconvenience to be done away with when it is deemed to hamper planning dictates. The decision to demolish the three shophouses sets a highly unhealthy precedent. It negates the critical role of heritage conservation in Singapore’s national planning agenda and undermines decades of painstaking efforts by state agencies, building owners, heritage stakeholders, professionals and builders, and the progress in conservation achieved so far.

The authorities have presented the ‘conflict’ in planning priorities as a false dichotomy — that of development versus heritage. The choice is not binary for a much more balanced and integrated approach is possible. However, this will require a great deal more political will, belief, and effort from all sectors than has thus far been evinced.

This ‘exceptional course of action’ – to demolish and reconstruct part of a gazetted conservation building – will have long term implications on future planning and conservation policies. That being the case, it behooves the authorities to undertake a proper Heritage Impact Assessment, consult with stakeholders, and engage with experts to explore alternative solutions. It is not evident if any of this has been done. Indeed, the authorities have kept silent all these months on this proposal and only unleashed it on an unsuspecting public in mid- August this year.

THE PROBLEM OF RECONSTRUCTION

While reconstruction is recognized as one of the strategies in conservation practice, it is only recommended for damage inflicted on highly significant heritage structures and sites in situations that are beyond control, such as warfare or natural calamities, as part of the healing process of not just the city but also for its inhabitants. This is clearly not the case for Ellison Building. The proposed partial demolition and reconstruction is a conscious planning decision. In this case, the decision to reconstruct appears to be little more than a convenient and expedient resolution that short circuits the due processes described earlier.

—
About ICOMOS Singapore
ICOMOS Singapore is Singapore’s National Committee of the International Council on Monuments and Sites (ICOMOS), founded in Warsaw in 1965, following the signature of the International Conservation and Restoration of Monuments and Sites (‘Venice Charter’). ICOMOS is an association of over 10,000 cultural heritage professionals from over 100 countries, working for the conservation and protection of monuments and sites – the only global non-government organisation of its kind. ICOMOS is officially a UNESCO advisory body. It actively contributes to the World Heritage Committee and takes part in the implementation of the World Heritage Convention