The Independent Singapore News
Home News Featured News “I spent the last three years being harassed, and having my modesty...

“I spent the last three years being harassed, and having my modesty outraged by my neighbours” : One woman’s story goes viral

After three years of alleged sexual harassment by her neighbours, Pek Yi Tsing took to online platforms such as Facebook and Reddit to ask for help.

She wrote, “I spent the last three years being harassed, having my modesty outraged by my neighbours and getting ignored by the authorities”.

She lives in a rented two-room flat in Marine Parade with her family. She wrote that her neighbours were running around and singing at odd hours of the night. She added, “Little did I know the rowdy boys were just a prelude to an avalanche of problems. As they grew up to become teenagers with raging hormones, they started catcalling me. They hauled me derogatory names whenever I entered or exited the lift. They dared each other to look under my skirt, speaking in Malay, thinking that we do not understand the language”.

The group of neighbours would often make up to ten young men.

Yi Tsing wrote that she and her family threatened their neighbours with law enforcement and for a while, they stopped. However, when they realised it was all but empty threats, they started again.

She also alleged that calling the town council did not help.

She added, “The same happened when we contacted the police through the non-emergency number, who said they will be coming in 10-20 minutes to investigate the matter but nobody turned up.”

Pek also said that the Town Council and police were informed and “they emphasised that I should lie low while they liaised with the town council and police station. Well, it’s been one year since, and the situation has not changed. Not even one bit”.

Her estate’s Member of Parliament suggested that she purse legal options, which she flat out refused.

Pek explained that sharing her story publicly was a last resort. She said, “I have reached a dead end. I am done. I do not have the intention of intimidating anyone but I have had enough of being ignored. I am sick of being objectified, I am exhausted, I feel vulnerable in my home — my supposed safe haven. I just want to feel safe in my neighbourhood. I want to be happy about returning home to my family. Just once. I sincerely hope it is not too much to ask for.” 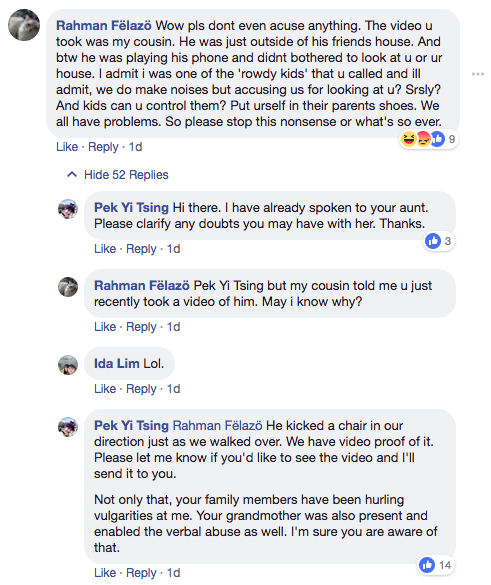 He wrote, “I have received the video. But what i saw is probably a few adults provoking a p6 child which was locked outside of the house. I think the reason why he was so mad was because he was alone and u guys pulled ur phones out and started recording him which made him annoyed and started to kick stuffs. So the main is why u guys must record this whole thing. Srsly u guys are out of ur minds”

Pek also posted updates of the situation on Reddit.

She said, “Mother of one of the teenage boys DMed me after seeing my post on Facebook. She confirmed that most of the boys sitting at the lift landings are friends of her son”.

She also added that the boy’s mother was apologetic and wanted to resolve the matter.

Her post went viral and saw netizens very divided on the matter.