Not only did Mr Wang get beaten up, the assailants also stole Mr Wang's iPhone and gold necklace during the scuffle 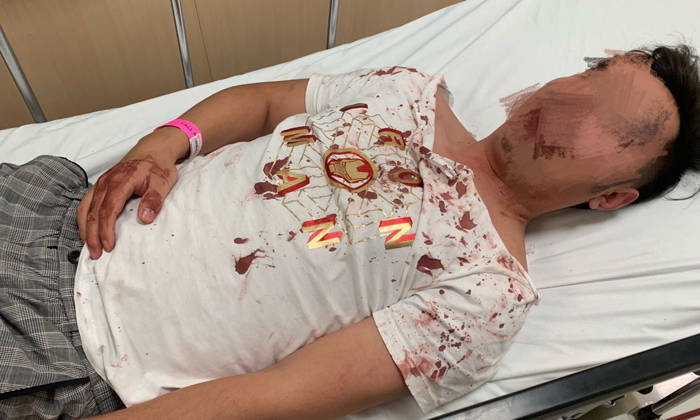 A Chinese couple who had come to Singapore for their honeymoon had their expensive vacation, that cost a hefty S$20,000, ruined when four drunk men beat up the husband for protecting his wife.

Mr and Mrs Wang arrived in Singapore earlier this month for a short visit. They were planning to make a stop at Indonesia before returning to China. One evening, the couple went for a karaoke session with their friends at Bugis Cube.

The group left the outlet around 5am and bumped into a group of seven men, some of whom began gesturing at Mrs Wang. Mr Wang told the Chinese daily: “My wife went ahead and ran into some tattoed men who teased and gestured at her. To avoid conflict, I let my wife and our friends leave first but about four of them rushed towards me and started beating me up.

“The entire process took about six minutes. They left after hearing us wanting to call the police.”

According to the Chinese daily, CCTV footage from a nearby shop captured the incident. The video reportedly shows a man in a scuffle with two others before the trio fall to the ground and another two men join the fight. A woman was reportedly seen trying to stop the fight before she was stopped by another man.

Bloodied and severely injured, Mr Wang was conveyed to Tan Tock Seng Hospital where he received a total of four stitches. Revealing that she suffered injuries to his head, legs, forehead, nose bridge and upper jaw, Mr Wang told the publication: “My whole body ached, I could only lie down. I don’t have strength in my right arm and could only rely on people to feed me. I feel pain sometimes when my eyes turn.”

Mrs Wang did not escape the incident unscathed. She suffered bruises on her neck and limbs that were caused when she was pushed during the scuffle.

A friend of the couple, Mr Long, told the daily that he was shouted at and punched when he tried to stop the fight. He added: “My girlfriend at the side kept crying for them to stop but they wouldn’t.”

Besides beating Mr Wang up, the assailants also stole Mr Wang’s iPhone and gold necklace during the fight. The valuables are worth about S$3,000.

The Wangs were devastated by the loss of the iPhone since it contained photos and videos of their honeymoon that they wanted to use for their wedding banquet.

Mr Wang has reported the case to the local police and is expected to seek assistance from the Chinese embassy in Singapore. He is reportedly considering whether to take legal action. -/TISGFollow us on Social Media