The Independent Singapore News
Business & Economy Personal Finance How Much It Takes To Save For A Wedding In Singapore?

How Much It Takes To Save For A Wedding In Singapore? 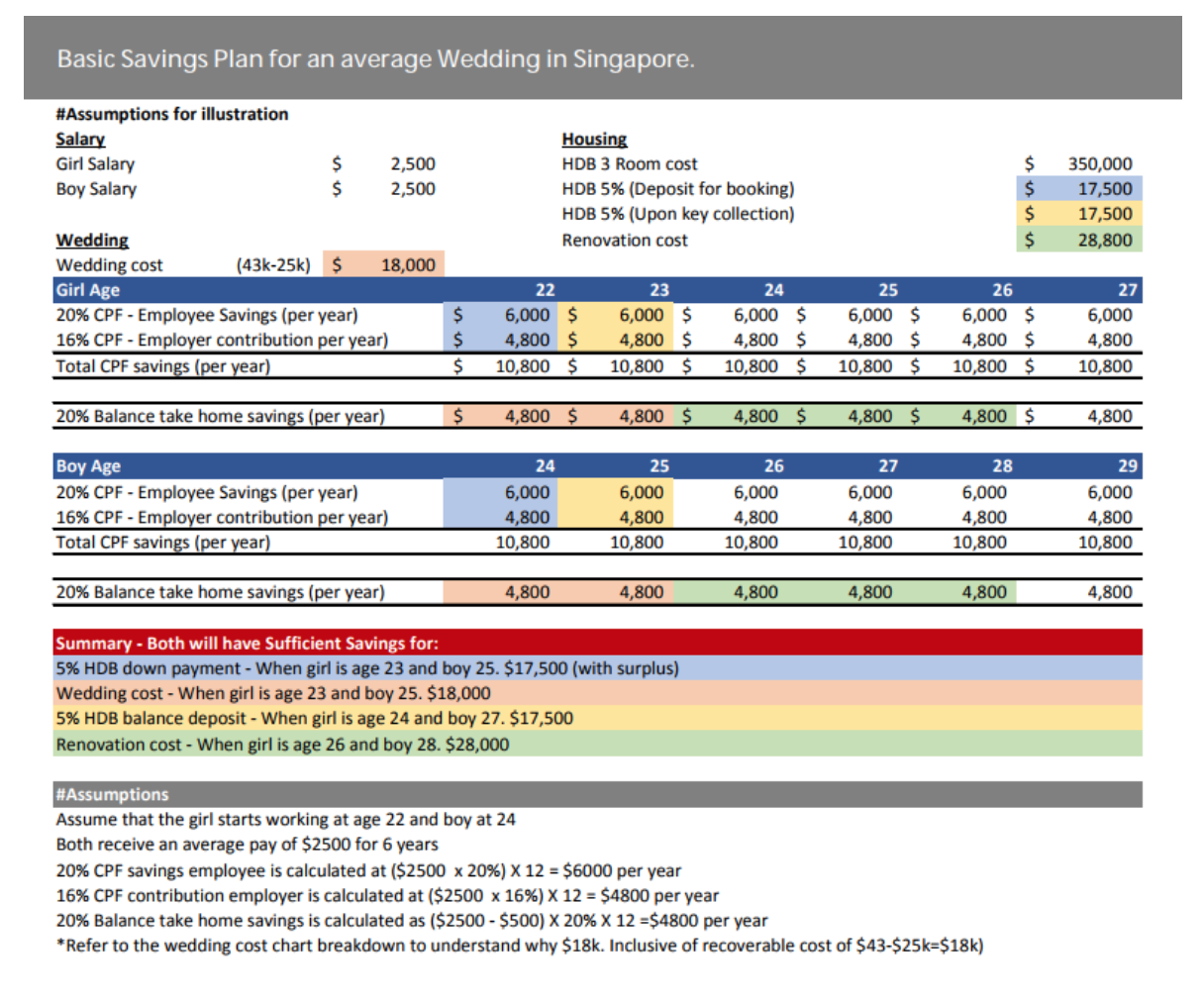 If you’re planning on getting married in the future, it’s a good idea to prepare for this in advance. To ensure you have enough money saved for this, we’ve highlighted the costs that are involved in saving for an average wedding, based on the figures spent by the general population.

This representation is not indicative of all weddings in Singapore, as wedding budgets and expectations vary from couple-to-couple. There are also some costs you may be able to recover through your guests “Red Packet” and if guests cover the cost of the wedding banquet.

Ring and band – You will generally have to pay around $4000 for a wedding ring and band, which is a non-recoverable cost.

Dowry and gifts – A dowry and wedding gifts must be paid for in advance as part of the wedding costs. This financial outlay is non-recoverable.

Photographer – Hiring a wedding photographer is essential to capture the special moments on your wedding day. It comes at a non-recoverable cost of $1500.

Wedding Banquet – A wedding banquet is a major part of your wedding celebration and a general estimate is this will cost $30,000. Whether this is a non-recoverable or recoverable cost is dependent on the generosity of your friends and family.

Based on these figures an average wedding in Singapore will cost $43k. But with the addition of a “Red Packet” and the cost of the banquet covered by friends and family, this brings the figure down to $18k.

Knowing The Cost, How Do I Save Enough Money To Get Married?

So that you can afford to get married and put a deposit down on a new flat, as well as cover the costs of future renovations, here is an average estimate of the savings you’ll require and what it will be spent on. This is only a gauge based on the salary and savings of the general population.

Deposit on HDB flat – If a couple with a 22-year-old female and 24-year-old male start working and saving from this age onwards, then within a year they will have enough to put a $17,500 deposit on an HDB flat.

Pay for a wedding – At the same age of 22 years and 24 years, if the couple starts saving for a wedding in conjunction with the deposit on the HDD flat, they will also be able to afford to get married in a year, if the wedding costs $18k, as outlined in the aforementioned figures.

HDB flat balance of the deposit – On top of saving for a wedding and the initial deposit on their HDB flat at the ages of 22 years and 24 years, if the couple also saves for the remaining HDB flat deposit balance they will have covered the final $17,500 in two years.

Costs of renovations – By beginning to save at the ages of 22 years and 24 years the couple will also have enough money put aside to pay for renovation costs of $28,800 within 4 years.

If young couples start saving early and stick to their savings goals, a good guide being the diagrams outlined above, they will be comfortable and well established in future.

By getting married before the age of 30 years old and not splurging on extravagant purchases, then young couples can live comfortably and affordably.

To make saving for the future a more simple and streamlined process, download the Seedly app. The Seedly app helps young couples to be able to manage their personal finances efficiently. With Seedly you can have all your finances in one place synched in one place, with transactions automatically imported from the banks.

It also manually tracks your finances and separates these into categories, such as transport, so you know where your money is being spent.

Seedly is also simple and easy to set up and 100 per cent secure, with encryption technology. So get started on savings early with Seedly!

This great article was contributed by Jaeden Ta.
Jaeden Ta is the Chief Happiness Officer at Singapore Promo and Deals Portal – KiasuPromos. Apart from work, she loves rock climbing, mountain biking and has a passion for baking.
Source: Seedly
Follow us on Social Media