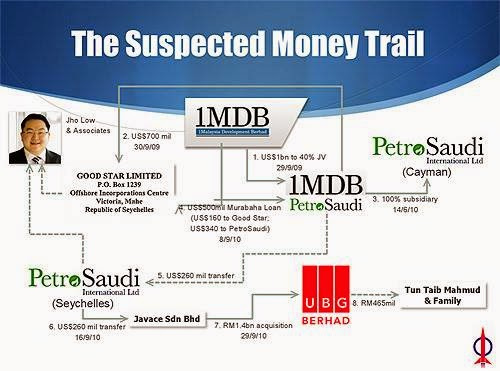 Lashing at his fellow Member of Parliament from the opposition did Johari Abdul Ghani who is second Finance Minister in Malaysian Prime Minister Najib Razak’s cabinet, deliberately omitted the facts that stand out in the 1MDB scandal

In a letter published by Malaysia Kini yesterday, Johari urged opposition MP Tony Pua to let time follow its course, and let due process set in on the 1MDB issue, but he himself failed to put the doubts and the many questions to rest.

Instead, his letter exposes all the twist and turns and the ‘ignorance ploy’ that some quarters have used in their blatant attempts to bury the 1MDB scandal.

In his long plea to Pua, Johari explained on what he thinks of the 1MDB issue and of Pua’s constant attacks against his person and the government.

On the Public Accounts Committee (PAC) report, Johari said the only conclusions that he can make from the report are that 1MDB suffered from poor corporate governance, wrong business model, and weak management.

However, the 1MDB had a three-tier check-and-balance system comprising of a Board of Advisors, a Board of Directors and a senior management team but it still failed to achieve good corporate governance, as claimed by Johari himself.

Before the outbreak of the scandal, the Board of Advisors was chaired by the Prime Minister of Malaysia, Najib Razak.

The lawyer said the signing of the documents does not necessarily mean that the prime minister had knowledge of or makes the decisions on 1MDB matters.

Well, if that is how corporate governance is run, then there is no case to answer, right

Johari said that to a certain extent, resolving the 1MDB issue is also crucial to uphold Malaysia’s credibility as a nation in the eyes of the world.

But if the Chairman of the board of advisors who has his signature on the documents is not responsible for the problems caused afterward at 1MDB, then how does Johari intend to solve the problem?

Or were they just signing documents and approving funding without knowing, similar to their advisory chairman?

Johari also said he has never seen or experienced anything of the sort where almost all the agencies, ranging from the police, MACC, Bank Negara Malaysia, the auditor-general, the public accounts committee and the attorney-general, scrutinised the 1MDB issue in extensive depth and all at the same time.

We all know that Bank Negara has only declared the issue resolved after a change of leadership at the Malaysian central bank, with the departure of Zeti Aziz.

That does not sit well with the public, does it?

Two directors of the 1MDB were cleared in Malaysia, Najib got cleared surely because he was not aware of what was happening after he signed documents, but in Singapore bankers and high ranking officials were jailed, fined and banned based on the 1MDB probe.

Johari said despite all the investigations there is ‘complete picture’ on 1MDB, adding that other countries – including Singapore and the USA – are investigating 1MDB based on their compliance issues.

This is totally baseless since Singapore has condemned several personalities based on their involvement in the 1MDB issue, not the contrary.

These links says it differently: MAS slaps prohibition order on Goldman Sachs official and we have the BSI issue.

In Singapore alone, people were charged for forging reference letters for Jho Low without the bank’s approval and one for not reporting transactions potentially involving the proceeds of crime.

The Today portal said in October 2012, US$790.35 million was transferred out of 1MDB subsidiary 1MDB Energy (Langat).

Two weeks later, US$110 million found its way into the Swiss bank account of Selune, a company owned by Jho Low.

Prosecutors said the money had been moved through nine business and personal accounts in six local and foreign banks – including Standard Chartered Bank, Coutts and Falcon Private Bank – to mask the true source of the funds.

Back to Malaysia, the fact that the Attorney General was subsequently replaced and the that the PAC report on 1MDB is classified under the Official Secret Act (OSA) says it all.

He said as far as the government is concerned, there is nothing to hide and nothing to cover up.

But until today, the PAC report is classified under the OSA, and the minister said the government has nothing to hide?

The minister even tried to camouflage the United States’ Department of Justice (DOJ) case related to 1MDB as if it was not related to 1MDB but admitted the US froze assets allegedly belonging to certain individuals (he did not mention the name of the son of the wife of the Prime Minsiter) connected to 1MDB!