How did alleged StanChart robber manage to flee Singapore?

The StanChart robbery has again put a spotlight on SPF. Looks like our scholars will be brainstorming preventive measures to prevent a recurrence of the same act?

Just 4 months earlier, ST had trumpeted “Network of CCTV cameras proving effective”. With about 100,000 CCTVs in our 719 sq km little red dot, how did the robber flee Singapore after his description had been given to the police? Can the police prevent terrorists from entering Singapore when they can’t prevent a criminal from leaving?

According to a media report, the robber had fled on foot after mission accomplished. Hmm .. ran to Bangkok in 6 hours?

Credit must go to the poor frightened teller who had managed to remain cool and followed SOP, “just follow law” is right after all. After the police were alerted:
– at least 10 police vehicles arrived at the scene with dozens of police officers.
– a number of them were seen peering into a rubbish bin.
– with the last few officers leaving at around 5 pm. 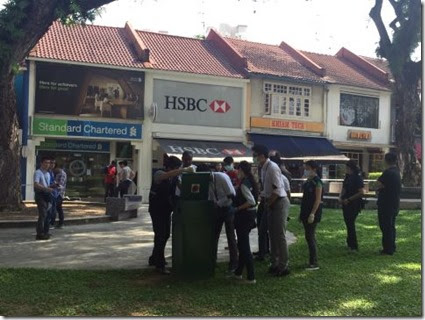 The same report also mentioned a Ms Dick and Mr Bek as two “eyewitnesses” although they did not witness the robbery.

Yet another “eyewitness” was a Dr Ang who was driving on his way to Chip Bee Gardens at around 1.30 pm, 2 hours after the robbery had taken place.

The alleged robber was reported by a more credible press to have landed in the Land of Smiles at 5.08 pm local time. So, he did not flee on foot all the way to Thailand and was likely to have been on one of the following flights:

Since the police had at least a couple of hours to view the CCTV video footage and pass on the necessary information to immigration officers at Changi Airport, did they? Should there be a new protocol after yet another lesson learned?

Following the robbery, suggestions to StanChart came thick and fast. The No. 1 suggestion to improve its security: More cardboard policemen with different wording. 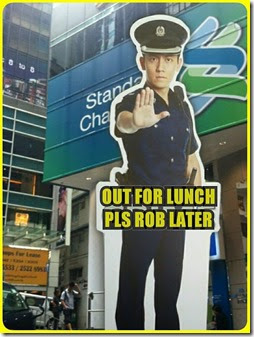 Many Singaporeans are under the impression that cardboard cutouts of “yan dao” policeman is an original SPF idea. According to this 2013 article, “yan dou” predecessor is a 7-ft tall ang moh, cost GBP 255 and made his appearance in 2011.

Unknown to many, “yan dao” has an older brother in UK. 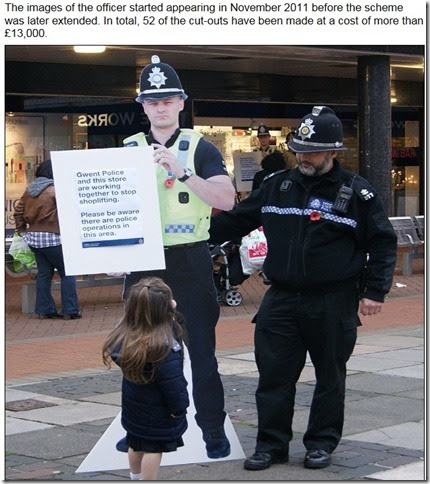 So did SPF simply “copy and paste”, similar to MOE’s “Every school a good school” which was copied from Northern Ireland?

Singaporeans should thank the Thai police for having done an amazing job, considering the number of ang moh tourists in Bangkok and a relatively chaotic city of more than 10 million. Spending only a fraction on CCTVs has not handicapped the Thai police force in any way.

With our superior technology costing billions in tax dollars, how did the alleged StanChart robber manage to flee Singapore after having been seen?

—
P.S. – According to a Today report by Laura Philomin on 7 July:

But another report on the same day presented a different set of facts: 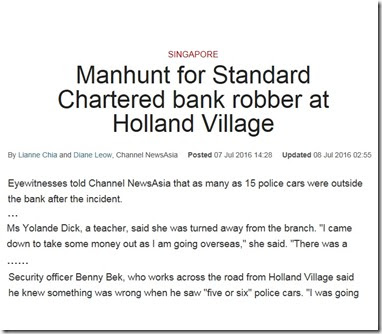