The Independent Singapore News
International Business & Economy How can anyone trust GIC to manage CPF when it can't even...

How can anyone trust GIC to manage CPF when it can’t even grasp significance of Brexit?

GIC’s comments on “GIC’s UK property exposure faces test after Brexit shock” has confirmed it is unfit to manage our CPF.

According to the Sovereign Wealth Fund Institute, GIC:
– manages US$344 billion in assets (S$300 billion CPF/S$160 billion govt reserves)
– size of UK portfolio estimated to be US$24 billion.

GIC has also been aggressively snapping up property post 2008, especially in UK, while our investments have taken an average 25% forex hit in the last decade. 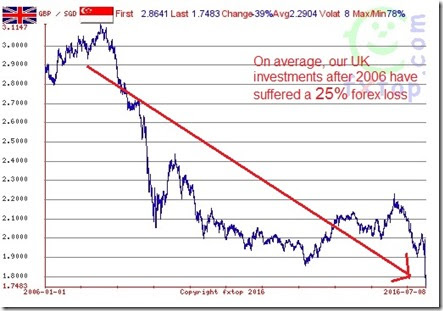 At 25% of US$24 billion, we are talking about US$6 billion in forex losses. Even if this is not the exact figure, it’s still losses in the billions!

And along comes this GIC chief economist, Dr Leslie Teo, with his Brexit-no-big-deal-la pearls of wisdom.

So when markets start to “push things down”, what will happen to our existing investments while we look for opportunities? Just ignore them?

Perhaps his “modestly long horizon” is similar to LKY’s 20 to 30 years. Or Tony Tan’s “for many years to come”?

Talk is cheap when GIC directors are not putting their money where their mouth is. Anyway they should not even bother since GIC has an endless stream of funds from our reserves and CPF. Rain or shine, their million dollar salaries and bonuses are assured. And so will more talking cock be assured.

Long term = higher risks = higher interest rates. If the elites can’t even predict what will happenin 2 to 3 years, how the hell are they to predict something that’s 20 to 30 years down the road? So CPF members should cease believing in rubbish spouted by the elites including Mr Chief Economist.

What our jiak-liao-bee elites want us to believe is this: what goes down must eventually come up. And they deliberately ignore the fact that many investments could also go belly up.

Based on historical data, it appears GBP’s depreciation has some way to go, no thanks to Brexit. One thing for certain, our UK investments will be hammered along with the British pound. 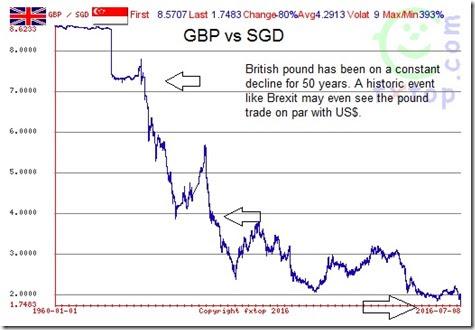 Can anyone trust GIC to manage S$300 billion of our CPF when it can’t even grasp the economic significance of a historic event like Brexit?

—
Republished from ‘likedatosocanmeh‘.Follow us on Social Media