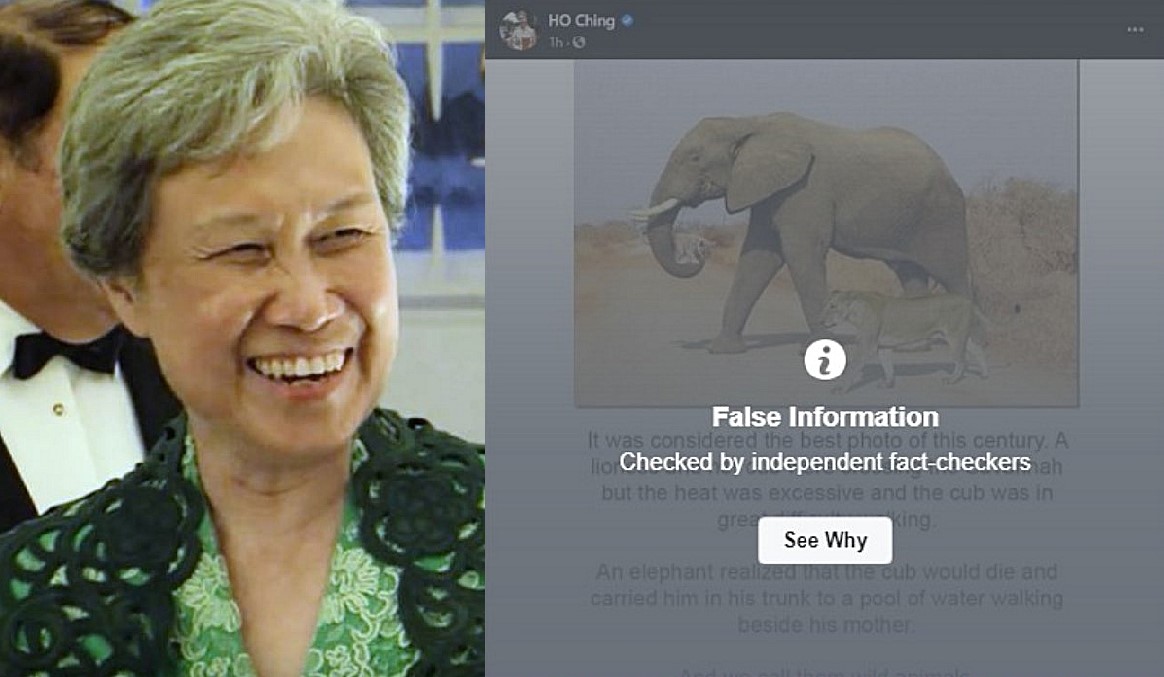 Singapore — Facebook regular Ho Ching has not only shared news that has turned out to be fake but she has yet to remove it from her Facebook page.

Ms Ho, who is the wife of Prime Minister Lee Hsien Loong, goes on intense sharing sprees and flood-posting her Facebook page with several links each day. The sheer number of posts has led people to ask how she, the Chief Executive of sovereign wealth fund Temasek Holdings, has so much time to spend on social media.

One of the many posts she shared on Friday (Aug 14) had a photo of an elephant carrying a lion cub with its trunk and a lioness by its side. The photo caption said: “It was considered the best photo of this century. A lioness and her cub were crossing the Savannah but the heat was excessive and the cub was in great difficulty walking.

“An elephant realized that the cub would die and carried him in his trunk to a pool of water walking beside his mother. And we call them wild animals. It’s a great lesson for mankind who are fighting and dying for no reason.” However, it is not a genuine photograph. The doctored image was shared on social media by the Kruger National Park in 2018 as an April Fool’s Day prank. The original post had the words “Sloof Lirpa”,  or “April Fools” spelt backwards.

A Google search of “elephant carrying lion cub” shows clearly that the image is fake. Ms Ho appears not to have checked the image before sharing it on her page. Facebook subsequently put up an auto-correction on top of her post showing that the image was debunked by its independent fact-checkers.

Perhaps Ms Ho was not notified that Facebook had flagged her post as fake news but several people online commented on her post that the image was photoshopped and had long been known to be fake. Ms Ho did not respond to any of these comments and her post remained up on her timeline as of press time: 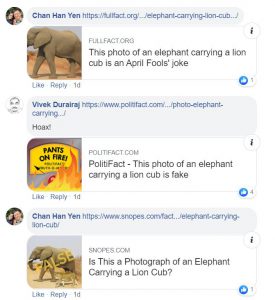 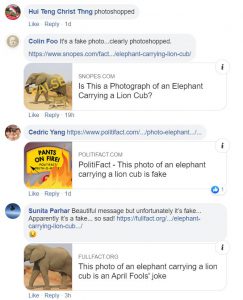 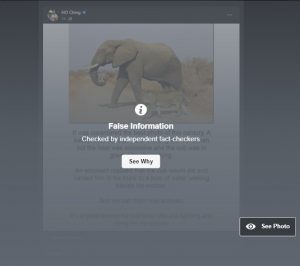 Ms Ho is known for having a strong stance against fake news. A few months ago, she slammed fake news spread by an alleged “ex-nurse” about the state of Covid-19 community care facilities. In December last year, she also warned of fake news in the form of manipulated videos.

In April this year, the Government invoked its anti fake-news law — the Protection From Online Falsehoods And Manipulation Act (Pofma) — and issued four Correction Directions over claims about her salary as Temasek CEO.