Following the Tamil errors on the door hangers given out by the People’s Action Party’s (PAP) non-elected Kaki Bukit branch chairman Shamsul Kamar, Chief Executive Officer (CEO) of Temasek Ho Ching has stepped in to offer her comments.

The brochures given out had seemed to use a computer programme to translate the Tamil language characters, which turned the message to gibberish.

Shamsul has since apologised for the error and oversight in printing the brochure.

Ho Ching, wife of Prime Minister Lee Hsien Loong, shared an article on her Facebook page and commented on the issue.

She, who rarely adds commentary to her many Facebook posts wrote, “This is interesting.

Typically, when designers lay out artwork, they would insert a gibberish “text” to give a sense of overall look and feel.

This is better than putting in actual text with meaning – gibberish is unlikely to be mistaken as final text”.

She continued, “But what if the gibberish is in another language in a different script? That would be harder to spot the mistake”.

Netizens had much to say on the issue, and Ho Ching even replied to some in the comments. 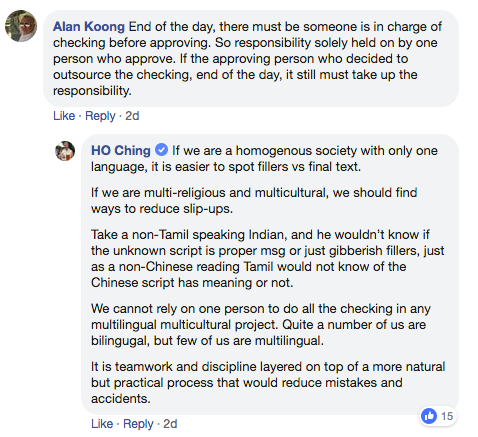 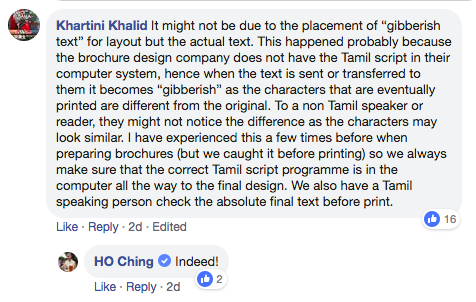