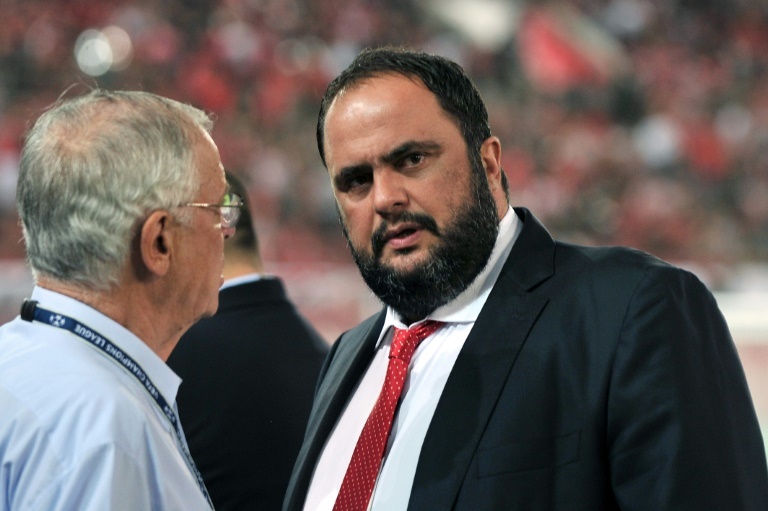 GREECE millionaire Evangelos Marinakis is a bit like the late Lee Kuan Yew. He strictly means business and prepared to sack under-performers.

He owns Olympiakos, one of the top football clubs in Greece, and on Monday he shockingly delivered an unbelievable message. He fined the team 400,000 euros (S$650,000) and ordered the club’s players to go on holiday until the end of the season!

“I will build Olympiakos from the beginning and it will become the team we are dreaming of. I and the rest of the fans have tolerated you enough. You will leave today and go on holiday,” Marinakis was quoted in the Greek media as telling the players.

He said very few in the current squad will be retained for the final three matches of the campaign, with replacements to be called up from the Under-20 team.

“The amateur teams live with the basics, they love Olympiakos and their supporters much more than you do,” he continued, vowing to re-invest money collected from the fines into the club’s amateur teams.

“(You think more about) the nice houses you live in and your cars and don’t care about the team,” Marinakis reportedly told players.

“I pay millions for you to have everything. With your actions I fired three coaches. But at the end it looks like you were at fault.”

Marinakis said half the fine was for last weekend’s draw against Levadiakos with the remaining 200 000 euros punishment for a recent 1-1 draw against arch rivals Panathinaikos. Third-placed Olympiakos trail leaders AEK Athens by nine points, with the former deducted three points over fan violence during their 2-1 loss to AEK in February.

I deliberately compared Marinakis to Singapore’s late founding father Lee Kuan Yew because of a famous 1980 incident over wage disputes with the senior pilots at Singapore Airlines.

Lee had a fractious relationship with their union for staging an unofficial work-to-rule protest in November, to demand a 30 per cent basic pay rise, among other things. He summoned the union officials to the Istana and told them bluntly he would ground SIA, sack all the pilots and build a new national carrier unless all flight operations returned to normal and the airline’s image, restored.

In absolutely no-nonsense terms, Lee warned SIA management and pilots that there would be “broken heads” if tensions over wages continued to escalate.

I clearly remember Lee’s awesome words: “I didn’t meet them on TV, I met them face-to-face. Five feet across the table so they can see me, and see whether I’m still vigorous, able to campaign and take them on. Whether it’s worth taking me on.

“And I offered them two choices. Either you stop this intimidation, which is what it was, bringing SIA right down. Disrupting services, ruining its reputation.”

Lee said that “millions of dollars worth of advertisements and sales ruined within a matter of two weeks” and he gave them a choice.

“Continue this and I will by every means at my disposal teach you and get the people of Singapore to help me teach you a lesson you won’t forget. And I’m prepared to start all over again or stop it! Get back to work, restore discipline, then argue your case.”

And in an awe-inspiring message to Singaporeans then, Lee said: “Let there be no mistakes about it. Whoever governs Singapore must have that iron in him. Or give it up. This is not a game of cards. This is your life and mine. I spent a whole lifetime building this. And as long as I’m in charge, nobody’s going to knock it down.”

Back now to Marinakis: For the record, Olympiakos won every Greece league title between 2010 and 2016. But at the same time Marinakis sacked seven managers in that time, including Marco Silva, Ligue 1 winning Monaco coach Leonardo Jardim and Ernesto Valverde, the new man at the helm of Barcelona.

Money talks, as they say and the millionaire businessman is a mighty name in Greece. He is always hungry for success. He was named Greek Shipping Personality of the Year for 2017, by Lloyd’s List.

And Marinakis says it is thanks to his success in the industry that he has been able to branch out into other areas, including buying football clubs and helping the less fortunate, even through the United Nations (UN) Relief Fund.

“Our success in shipping allowed us to make important contributions and be winners in other areas: sports, including football, of course, in Greece and England, in the media sector, and in our beloved municipality of Piraeus,” Marinakis says. “Our achievements in shipping give us the power to try our very best to contribute to our society.”

Marinakis is chairman of Capital Maritime & Trading Corp, which has grown significantly during the past year.

“I’m proud of the coincidence to be born Greek and be involved in shipping,” he says. “In the shipping world you learn from the very beginning how to deal and compete with high waves, with enormous companies and very talented, bright and experienced people.

“Therefore, in order to really succeed at a high level, you must work very hard, perform, have faith and be consistent and proactive towards the requirements of our industry, which increase almost daily.”

The win-at-all-cost mentality is what fires Marinakis. He explains: “During this magnificent, but also difficult voyage, you learn how to fight and be a winner.

“In order to manage all this, you need to have the right colleagues on your side, the best skilful crews and a family who will stand behind you and support you.”

What a rip-roaring man! Evangelos Marinakis is every bit like the late Lee Kuan Yew. He strictly means business and unfailingly prepared to sack under-performers.