Formed in 1823, the Oxford Union is one of Oxford University’s oldest societies and debate group. Recently, a not-so-friendly exchange of views occurred at the Oxford Union between Malaysian Prime Minister Tun Dr. Mahathir and Darrion Mohan, a student of the university.

Darrion Mohan, who uploaded a portion of his dialogue with Dr. Mahathir in his Facebook profile, started out by mentioning the controversy revolving around the Johor Chief Minister Osman Sapian’s unannounced visit to a Malaysian vessel currently on disputed waters while claiming that he had the unofficial blessing of the foreign minister. But this was refuted by Wisma Putra himself and said that there was no blessing given and even advised the Johor Chief Minister to not go. Darrion proceeds to ask what actions the Malaysian PM would take against the Johor Menteri Basar if any measures would be implemented to ensure that this incident does not happen again. He also asks if Dr. Mahathir is in agreement that “actions such as these “contribute to the perception that the [Malaysian government] is pugnacious and acts in bad faith”. He quotes the words of Najib Razak of wanting “to return to the days of confrontational diplomacy and barbed rhetoric.”

Dr. Mahathir begins by questioning the student’s rights in making such assumptions based on his citizenship. He said that the student was welcome to use Najib Razak as a source but because Darrion is not a Malaysian citizen, he did not have the right to do so. The student replies by saying that he wasn’t choosing between Dr. Mahathir and Najib, he was simply quoting the latter’s point of view on the PM’s foreign policy. He reiterates his question by asking, “whether through the PM’s actions over the high-speed rail, the airspace, the maritime dispute, the crooked bridge, and the water price revision that he wanted to return to the fraught diplomatic ties with Singapore which was seen during the beginning of his tenure or if he wanted to go beyond that?”

The setup was based on the 1962 Water Agreement by the two countries but the PM says that it is unfair to Malaysia and was not allowed to make any revisions either. He proceeds to state some facts that anywhere in the world, the agreement is not a good deal because they selling for 3 sen per 1,000 gallons and buying at 50 sen per 1,000 gallons when the treatment is not expensive. The PM also mentions that in some cases in Singapore, the price was as high as S$60 per 1,000 gallons, which could be an error. “This is grossly unfair to Malaysia”, the PM adds. “It might be ok then but it is not ok now. We are different countries and we have to get back our money. For years, Singapore has benefited.”

Darrion masterfully steered the conversation back to his initial inquiry regarding the unofficial visit of the Johor Chief Minister, to which the PM replies, “Well, the Menteri Basar went without our permission and he thought it was Johor water that’s why he went there.” He says that the reaction to this incident is “quite severe as if you are going to war.” According to the Dr. Mahathir, those were neutral waters and the Menteri Besar “could go into international waters without Singapore sending warships to chase him away.”

Darrion was smart enough to pass on the mic to someone else even though he fundamentally disagreed because those waters were unclaimed and it was only until last year did Malaysia start declaring that it was their territory.

It was after the discussion that Darrion did some more research and double-checked the facts.

In his post below, he made a detailed report of what was said during the discussion and the clarifications he researched on:

The clash of perspectives was seen even in social media with both sides expressing their opinions. While others saw how ignorant and rude Darrion was during the debate, others disagreed. 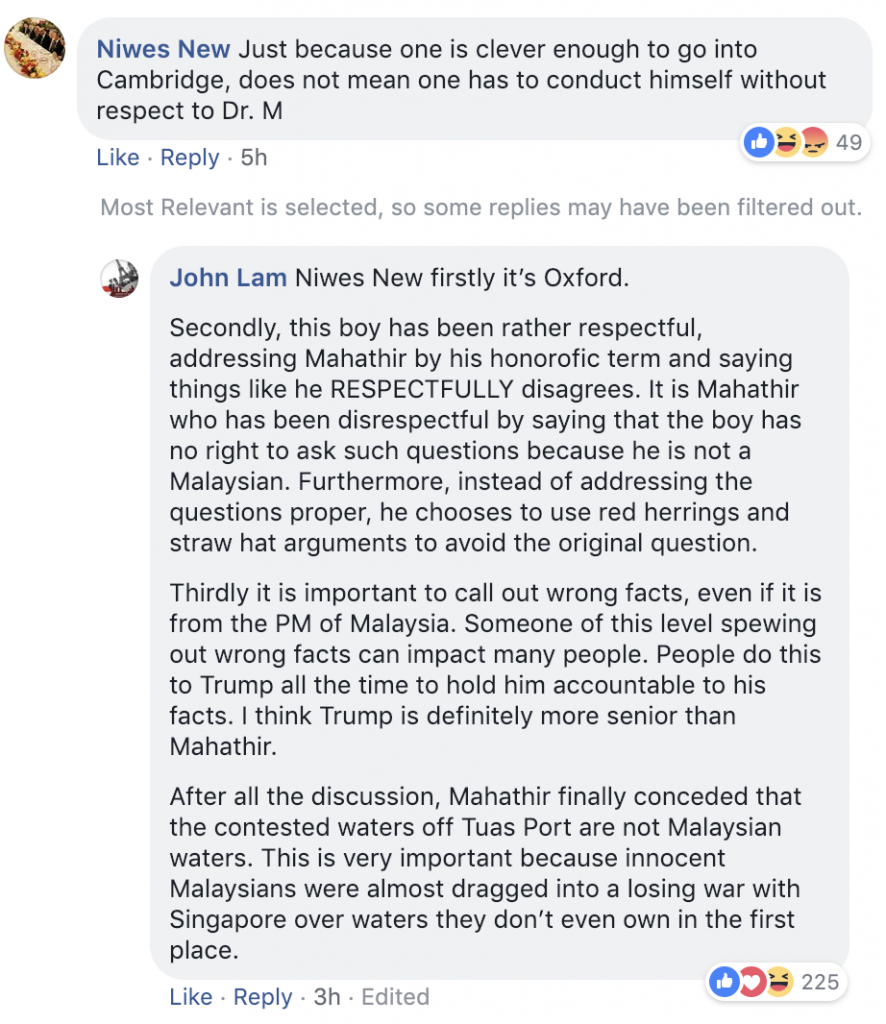 On the actual post of Darrion, he received numerous praise such as: