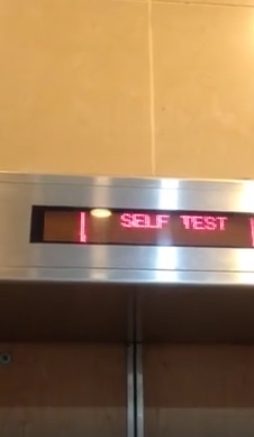 Facebook user Ong Heng shared a video of a lift in an unidentified HDB estate self testing itself. He captioned the video, “Ownself Test Ownself 自欺欺人”.

On 23 June, Channel NewsAsia reported that some Town councils were stepping up their lift maintenance checks ahead of new safety measures mandated by Building and Construction Authority of Singapore (BCA) kicking-in.
Commenting on stepped-up lift maintenance ahead of new regulation, Member of Parliament for Pasir Ris-Punggol GRC, Zainal Sapari, in whose constituency’s lift malfunction a 77-year-old man died, said:
“We have a tele-monitoring system for our lifts, and we are looking through all our records to check which lifts might have chronic problems, and to focus more on these lifts. In fact, when any lift has a reported problem, we try to look at similar models and check on these lifts as well.”
But on 24 September, STOMP reported another lift malfunctioning at Block 162 Jalan Bukit Merah. The door of the lift in Tanjong Pagar GRC broke just five minutes after a resident stepped out of it, the online publication reported.


Commenting on the frequent lift breakdowns and malfunctions, which besides inconveniencing residents, has also caused injuries and a death, veteran journalist P N Balji said in his Facebook:
“One man died, a woman had a fracture and….Our lifts are breaking down ever so often. This is no more a constituency problem. It is a national problem. Can a national leader take ownership and put matters right?”Follow us on Social Media