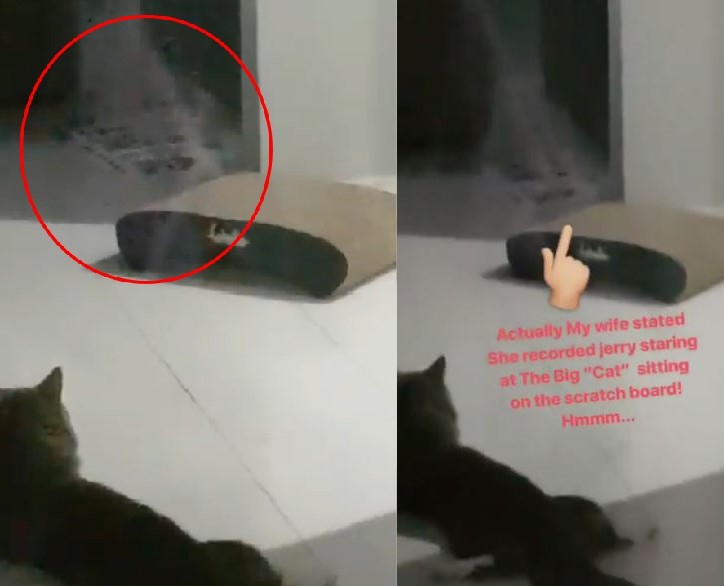 A Singaporean couple received quite a shock when they allegedly found a large cat had gotten into their 7th floor flat and became even more shocked when the cat appeared as a wispy shadow apparition when they tried to film it.

Facebook user Mohammed Fauzi Mokhtar revealed on social media that it was his wife who supposedly saw the large cat when she came home from work and noticed that their pet cats were acting strangely.

“This is Weird, Aisha Suhaimi took half day from work, reached home at 3am. While me still in the office. This is what she explained, when she stepped in the house, The youngest kitten Maya, went hiding, the 3rd cat jovi was at service yard & the 2 senior cat Bonita was growling & Jerry was staring blankly at the scratchboard towards our balcony.

“My wife was shocked to see an extra “cat” in our premises sitting on that cat scratchboard. She described it as a huge cat with a large centered spiral & many more weird patterned on the body. She was so shocked on how this cat can enter in our 7th storey unit n being so huge. The other kitties (best known for being territorial) did not attack it at all.

“Panicked she recorded directly in front of the “cat” sitting on the board while jerry boy staring blankly at it. To her surprised as what i share on the shortclip below its just smoky effect & theres no cat at all! The rest of our kitties just ran into our room.

“Luckily my neighbours Husband, wife residing just upstairs n my nephew who lived across the road came to assist looking out for that Stranger in our house. The “Cat” just nowhere to be seen at all any part or corner of our unit.

“Hmmm, Where’s that Cat she recorded on her phone & Whats that smoky features?”