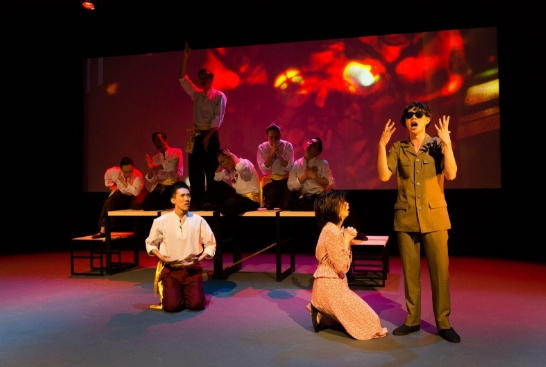 Geylang, a drama, produced by Wild Rice for the Singapore Theatre Festival 2016, harks back to a kampong or village, populated by Malays and Chinese in suburban Singapore during the late 1960s.

Staged recently at La Salle College of the Arts, it is more than a walk down memory lane as both the actors and audience believed that Geylang was never bulldozed to make way for redevelopment.

I will tell you about this in a minute.

Star of this play, Johnny, a Peranakan (a Malay speaking person but of Chinese ancestry) who spoke with a clipped British accent, was hell bent to impress his bigwig, PS or permanent secretary, on his strategy to drive the residents of Geylang to high rise government flats in order to make way for soaring skyscrapers.

Beyond Johnny’s show of bravado, his heart was bleeding because he will have to shoo away Makcik, a Malay lady and a family friend and who had taken care of him when he was a little boy.

Makcik operated a a mee rebus shop (a Malay noodle dish laced with chocolate coloured gravy) in Geylang and that was where he had spent many happy days during his young days.

Worried about her future, Makcik and her husband went to the posh office of Johnny to appeal to him to be allowed to stay in Geylang to sustain themselves.

For Johnny this meeting brought back memories and it got him to be torn between duty and his instinct to protect his second mother.

Another scene of the play showed Geylang swept by interracial riots and Makcik’s fellow Malay Villagers were locked in a cycle of violence with their Chinese villagers.

Gangsterism, a form of organized violence, rife and endemic in Singapore some years back was prevalent in Geylang.

The Chinese gangsters forced the villagers to pay protection money, they organized gambling dens, ran brothels and warred against rival gangs for control of their turf.

As if to test the limits of the Singapore media sensors, the director of this play went to town to to stage lewd acts and surprisingly they got the green light.

In this scene, the musclemen of the gangster chief fiddled the bodies of the women camp followers but the ladies dared not protest as they knew they were members of the fairer sex and so placed at the bottom of the pecking order of the gang.

One part of this scene showed Makcik’s husband flaked out on a table and several gangsters got hold of a razor sharp knife and they used it to slice off his private parts.

Finally. the time has come for Johnny to deliver his blueprint to resettle the villagers of Geylang to PS and all his assistants knew that he will toe the line.

Halfway through his delivery, the villagers gatecrashed, strolled casually in the room and they introduced themselves to PS.

They lost no time to get buddy buddy with him, one of them offered the most delicious durian (king of the tropical fruit) from the village and Makcik passed a container containing mee rebus to PS.

The congenial ambience got PS to be in a good mood, he chatted with them and that made him understand how resettlement would affect the down to earth people.

He was so moved by the sad stories that he declared verbally that the village would not be torn down and this piece of good news got the villagers to laugh, cry and dance with joy.

The carnival ambience on stage was so infectious that the audience shed buckets of tears, they too believed that Geylang will go on to exist intact forever and this kind of false belief show that the dramatist is also an illusionist.

He had tricked the audience. The truth is that Geylang is now peppered by cloud piercing skyscrapers.  Follow us on Social Media