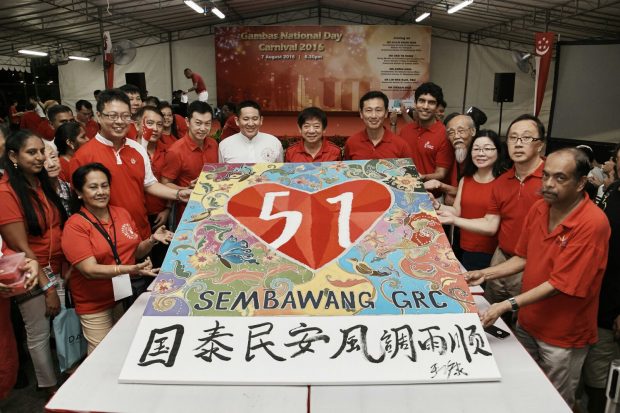 As Singapore launched its 51st National Day celebration island wide in the face of a foiled terror plot from Indonesia, the festive mood was hardly dampened at Gambas National Day Carnival. Held at the hard court beside Sembawang Sun Plaza on 7 August 2016 from 6.30pm to 9.30pm, the inaugural celebration materialised with the coordination of 50 Gambas volunteers and participation of approximately 1,000 residents.

The event highlight was a 1.8m by 1.5m contemporary artwork, which combines traditional art techniques from Rangoli drawing, batik painting and Chinese calligraphy onto one canvas. The artwork symbolises Singapore’s melting pot of races and cultures, and the challenges of unifying such diversity in this era of growing ideological tensions. Minister Ong Ye Kung, Advisor of Gambas Grassroots Organisations, added the finishing touches to the symbolical artwork together with four other advisers from Sembawang GRC.

Alongside stage performances by pre-schoolers and youth from primary, secondary and tertiary levels, there were traditional handicraft and food stalls operated by younger generation keen to preserve the authentic traditional flavours. The carnival ended with a mass Zumba session and marked the beginning of Singapore’s new chapters towards SG100.